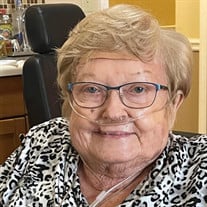 Wilma Jo Kile, 87, a lifelong resident of Rushville, Indiana but most recently of Fishers Indiana, died on July 25, 2021. She was born in New Salem, IN, on February 21, 1934, to Ebert and Bess (Peabody) Schroeder. She graduated Valedictorian of New Salem High School Class of 1952. She received her BS from Hanover College in 1956, and completed her Masters at Butler University. She taught school at Richland, Graham, Rushville and Milroy Elementary Schools in Rush County. She went on to be in charge of the Title 1 Program, be a principal of Mays School and finished her career as Assistant Superintendent of Rushville Community School Corporation. She was active in The Rush County Community Foundation, Eastern Star, The Rushville Library Board, The Parks Board, and her beloved Bridge Groups. She was also a proud member of DAR. Wilma is survived by 2 children, Christie Love (Jay), and Nick Kile (Kim). She is also survived by 7 grandchildren, Brad Love (Liz), Katie Hendrickson (Ross), Patrick Love (Alyson), Emily Kile-Maxwell (Peter), Erik Kile (Anna), Erin Kile (Eric Kelly), and Ethan Kile. She is also survived by 8 great-grandchildren, Eleanor, Annabel, Hadley, Nate, Betsy Jo, Hattie Jo, Charlotte and Julia, two of which carry her name. She is preceded in death by her parents, and her brother, Richard Schroeder. The importance of education was a foundation of Wilma’s life. Wilma was a true presence in many lives, because she always spoke her mind. She was wise and strong, and very dedicated to doing things the right way and on time. She was born among a generation of women, who did not often have an opportunity for higher education or leadership roles, and she forged ahead always in a position of strength. She was an advocate for and sponsor of women advancing in education, careers and business before we even knew what that was. Everyone has a Wilma Jo story, if you have ever met her. She spoke honestly and firmly, and you either loved it or hated it, but oh so often she spoke the truth. She leaves behind quite a legacy of giving back to the community and much of her strong spirit lives on in her children, grandchildren and great-grandchildren. She was a leader and did much good for the community of Rush County that she served. She was giving of her time and her treasures to many! Wilma has requested that there be no funeral, so she will be cremated and buried with her parents in the East Hill Shrine Mausoleum. There will be services for immediate family at graveside. A Celebration of life service will be held at a later date and further details can be obtained by calling either 317-696-9153 or 317-488-7178. Tributes are welcome at mostermortuary.com, and in lieu of flowers, gifts should be given to the Ebert H. And Bessie M. Schroeder Fund administered by the Rush County Community Foundation in her memory! This Fund was established by Wilma in 2020. To read more about this Fund and learn how to donate, please see: https://rushcountyfoundation.org/donor-spotlight-wilma-jo-kile/ Services entrusted to Moster Mortuary, Rushville.

Wilma Jo Kile, 87, a lifelong resident of Rushville, Indiana but most recently of Fishers Indiana, died on July 25, 2021. She was born in New Salem, IN, on February 21, 1934, to Ebert and Bess (Peabody) Schroeder. She graduated Valedictorian... View Obituary & Service Information

The family of Wilma Jo Kile created this Life Tributes page to make it easy to share your memories.

Send flowers to the Kile family.