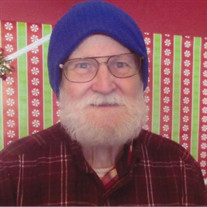 William O. Kirkpatrick, 75, a long time Jackson Twp., Rush County resident, passed away in New Castle on January 28, 2019. William was born January 3, 1944 to J. Wendell & Jean F. (Wainwright) Kirkpatrick. He was the last child of 3 and was preceded in death by his brother, John W. Kirkpatrick formerly of Reno, NV and his sister, Carol Ann Kirkpatrick Warner formerly of Auburn, IN. William married his high school sweetheart, Susan Abernathy and that marriage lasted 17 years. He married Rebecca Ann Duff on July 12, 1997 and she preceded him in death on March 24, 2014. William grew up on his dad’s farm in Jackson Twp. He was a 1962 graduate of Rushville Consolidated High School and attended Purdue University for 3 ½ years. He farmed & was a truck driver for many years. William was a long time member of the Center Christian Church. He is survived by his son, Matthew D. & wife Tricia Kirkpatrick of Chesterfield, MO., a daughter, Jennifer Kirkpatrick Trobe of Rush County and his grandchildren, Ashlyn, Jaela, Bryce & Makenna Kirkpatrick and Samantha & Emily Trobe. Services will be held at 10 AM Friday, February 1, 2019 in Moster Mortuary, Rushville with Pastor Darryl Denney presiding. Friends are welcome to visit at the mortuary on Thursday evening, January 31 from 5-7 PM. Burial will be in the Little Blue River Cemetery in Center Twp. Memorial contributions may be made to the Alzheimer’s Association.

The family of William O. Kirkpatrick created this Life Tributes page to make it easy to share your memories.

Send flowers to the Kirkpatrick family.