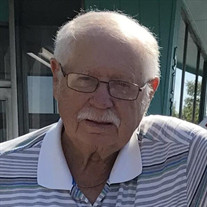 William Franklin Gulde, Sr. January 30, 1937—January 18, 2020 Bill Gulde, Sr., a lifelong resident of Rushville, passed away on January 18, 2020, at Rush Memorial Hospital. Bill was the youngest child of Joseph and Anna Ayres Gulde. He spent his formative years in Rushville surrounded by his large family and his many friends. He graduated from Rushville High School in 1955 and then began working for his father and brother as a construction contractor. As a young man, he helped to build several homes and commercial structures in Rushville and Rush County, including the Rushville fire station and Miller’s Merry Manor, then called the Jackson Nursing Home. In the second half of his career, he served as a general contractor. He spent countless hours helping his customers repair and improve their homes and structures. On December 28, 1963, he married Karmen Boling, a native of Milroy and an English teacher at Rushville Consolidated High School. The couple had four children: William Gulde, Jr., of Indianapolis; Robert Gulde (Melia) of Rushville; Carl Gulde of Indianapolis, and Susan Gulde (Chris Capehart) of Indianapolis. Along with his wife of 56 years and children, he also leaves behind grandchildren, including Juliann (Grant) Allen, Audrey Price, Abigail Gulde, and Zachary (Alejandra Reyes) Capehart, as well as great granddaughters Sophia, Luna, and Eliza. His family was very important to him and he especially enjoyed the holidays when everyone came home. He was the last member of the Joseph and Anna Gulde family as he outlived his parents, and his siblings, Josephine Gulde Weidner, Barbara Gulde Schmall, Marjory Gulde McGrath, Joseph (Bud) Gulde, and Anna Kathryn Gulde Cole. When he wasn’t playing pool at the Elks, golfing, or tinkering in his shop, he could be found with one of his beloved dogs near a pond with a fishing pole in his hand. He never cared if he caught anything, but he enjoyed being out in nature. His great sense of humor, optimism, and kindness towards others will be deeply missed by his family and all who knew him. A visitation will be held Thursday, January 23rd from 4:00 – 8:00 PM at Moster Mortuary. Private family burial will be held on January 24, 2020 in Calvary Cemetery. In lieu of flowers, the family requests that you honor Bill by donating to the Boys and Girls Club of Rush County Fund administered through the Rush County Community Foundation or the Rushville Animal Shelter, 223 Smiley Avenue, Rushville, Indiana 46173.

The family of William Franklin Gulde created this Life Tributes page to make it easy to share your memories.

Send flowers to the Gulde family.