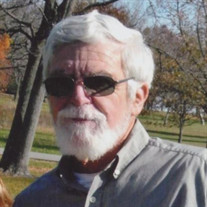 William L. Garrison, 72, of Richland, passed away on June 7, 2020 at his home surrounded by family. Bill was born July 14, 1947 in New Albany to Robert B. & Orpah L. (Ritchie) Garrison. Bill was a 1965 graduate of Oakland City High School and obtained his Bachelor's in Business from Indiana State University in 1969. Bill also attended Oakland City College and did the short course at Purdue University. Bill married Jan (Edwards) Garrison on September 12, 1981. Bill's father was a EUB/Methodist minister so the family moved several times throughout Bill's childhood. Bill had lived in Rush County most of his adult life. He knew a desk job would never be for him and when his parents moved to Glenwood to pastor the church he began building pole barns for Morton Buildings in Rushville and 30 years later, in 2012, he retired from there. Retirement didn't agree with Bill so he worked for Pioneer, Harvestland Co-op and Cannon Fabrications until finally retiring in 2019. Bill was a member of the New Salem United Methodist Church and had been a Volunteer fireman/EMT for Milroy for 16 years. Bill enjoyed reading and he loved to garden...a few years ago he canned over 100 quarts of beans. He was so tired of beans he pulled the plants just so he didn't have to pick anymore! He was a Nascar fan and was known to cheer on Tony Stewart. Bill loved spending time with his family, especially his son, daughter-in-law & granddaughters. He loved spending time with his "Taka" friends and parking lot picnics became a thing lately due to the Coronavirus. He is survived by his wife, Jan (Edwards)Garrison, of Richland, a son, Matt (Amanda) Garrison of Fountaintown, granddaughters, Brylee Hill-Garrison and Haddie Marie Garrison, brothers, Robert (Beverly) Garrison of New Salisbury and Larry Garrison of Beech Grove, Jan's brother & sisters, Dan (Lisa) Edwards, Nan Hoban & fiance' Ken Madden and Diane (Richard) Motz. Bill is survived by many nieces and nephews and great nieces and nephews and a great-great nephew. He will also be missed by his Collie, Greta. Bill was preceded in death by his parents, Robert & Orpah Garrison, Jan's parents, Dan & Jean Edwards and brother-in-laws, Randy Hornaday and Jay Hoban & sister-in-law, Ann Hornaday; nephew, Steven Garrison; niece, Amy Hoban; great-nephew, Skylar Seitz. Services will be held at 1 PM Wednesday, June 17, 2020 in Moster Mortuary, Rushville with Rev's Teresa Poole & Margaret Lowe presiding. Friends are welcome at the mortuary from 11 AM until time of service that day. Memorial contributions may be made to Our Hospice, Sheehan Cancer Center thru RMH Foundation or to the Rushville Public Library.

William L. Garrison, 72, of Richland, passed away on June 7, 2020 at his home surrounded by family. Bill was born July 14, 1947 in New Albany to Robert B. & Orpah L. (Ritchie) Garrison. Bill was a 1965 graduate of Oakland City High School... View Obituary & Service Information

The family of William L. Garrison created this Life Tributes page to make it easy to share your memories.

Send flowers to the Garrison family.