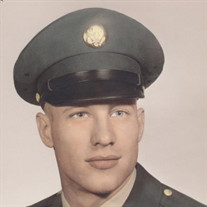 William E. “Billy Bob” Keith, 79, a lifelong Rushville resident passed away Saturday, September, 28, 2019 at his home in Rushville. Billy Bob was born in Rushville, IN on February 10, 1940 to the late Daniel Boone and Wanda (Moore) Keith. Billy Bob Served in the US Army and Air Force. He was a member of the Rushville VFW and the Rush County Honor Guard. He enjoyed being an umpire for the little league, playing baseball and fishing. Billy Bob is survived by 2 sons, Doug Keith and wife Christina of Rush County, Anthony Keith and wife Theresa of Rushville, a daughter, Danielle (Keith) Thorpe of Columbus, IN, a brother, Dick Keith and wife Goldie, step brother, Steve Keith and wife Kim both of Rushville, 3 sisters, Beverly Herbert Buhler of Rushville, Charlene Hauk of Cape Coral FL and Donna Jenkins Anderson and husband Gary of Rushville, 8 grandchildren, 7 great grandchildren and many nieces and nephews. In addition to his parents, Billy Bob was preceded in death by 2 brothers, Robert Allen and James Owen Keith and a sister, Doris Ann Boyer. No public services are planned. Memorial contributions can be made to the donors’ charity of choice.

The family of William "Billy Bob" E. Keith created this Life Tributes page to make it easy to share your memories.

Send flowers to the Keith family.