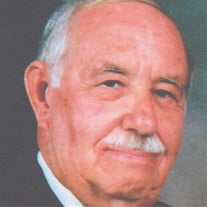 William “Bill” H. Conway, 86, of Punta Gorda, Florida, and formerly of Rush County, Indiana, passed from this world on Saturday, February 23, 2019, at Fawcett Memorial Hospital in Port Charlotte, Florida, due to complications of an accidental fall. Bill was born in Rushville, Indiana on February l, 1933. He was the only child of Robert R. and Francis M. (Woodmansee) Conway, who proceeded him in death. Bill grew up in Rushville, and spent many summers at the farm of his aunt and uncle, Russell and Florence Leisure. He was a 1951 graduate of Rushville High School where he was a member of the varsity football team. It was also at RHS that Bill met his high school sweetheart and love of his life - Betty Ann Faulkner. Bill and Betty were married June 8, 1952 at New Salem Methodist Church. Following high school, Bill enlisted in the United States Marine Corps and was stationed at Camp Pendleton and Korea. Following their marriage, Betty joined Bill in California until his deployment to Korea. In June of this year, Bill and Betty would have been married 67 years. Upon his return to Rush County, Bill farmed the family farms in Richland Township, and worked as a salesman at Christian Chevrolet and Siebert Chevrolet in Shelbyville. Bill was a member of the Rush County Historical Society and was a founding member of the Wake Riders Boat Club. In 1971, Bill and Betty moved to Punta Gorda, Florida and started a new phase of their life. Their business ventures included Gator Apartments, Burnt Store Travel, Caloosa Travel, and Pine Island Travel. During their 40 years in the travel industry, Bill and Betty traveled the world over, and were known for their cruise groups to the Caribbean and Alaska. In Florida, Bill was a member of Friendship United Methodist Church, Florida Flywheelers, PATA - Pacific Asian Travel Association (past president), Old Punta Gorda Historical Society, the Punta Gorda Elks, the American Legion, and the Pine Island VFW. Bill was an avid collector of "anything" John Deere, which once included a pole barn of antique JD tractors and a school bus he converted into the "Green Gator Mobile". He also restored several vintage/classic cars, enjoyed boating and fishing, and was a NASCAR fan. In his later years, Bill enjoyed "cruising" the property in his golf cart or his JD Gator and giving rides to his grandchildren or his cat Smokey Joe. He looked forward to spending summer months at the farms in Rush County. In addition to his wife Betty, Bill is survived by his daughter Margaret and husband Richard McQuinley of Rush County, Indiana; and daughter Marcia and husband Steven Reager of Charlotte County, Florida. Also surviving are grandchildren Nydia Stafford (FL), Kari (Brad) Ruth (IL), Ian (Monica) Apple (TX), Alicia (Ben) Cirrincione (IL), Lauren Apple (FL), Jacinda (Jeff) Jozefiak (FL), Joshua Reager (Shannon Albright) (FL), Cain McQuinley (CA), and Caleb McQuinley (IN). Bill was also blessed with 15 great grandchildren, all whom called him "Papaw". Memorial Visitation will be at New Salem United Methodist Church, New Salem Indiana on Saturday, April 27th, at 11:00 AM, with a Celebration of Life Service and Military Honors following at 1:00 PM. Internment will be in East Hill Cemetery in Rushville, Indiana. Memorial contributions may be made to New Salem United Methodist Church (4451 E US Hwy 52, Rushville, IN 46173), or Rush County Historical Society, (619 Perkins St., Rushville, IN 46173). Arrangements have been entrusted to Moster Mortuary in Rushville, Indiana.

The family of William "Bill" H. Conway created this Life Tributes page to make it easy to share your memories.

Send flowers to the Conway family.