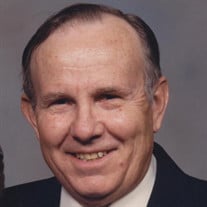 Thomas P. Turner, 93 lifelong resident of Rushville, passed away on September 4, 2020. He was born on December 12, 1926 in Rush County, IN to the late Raymond and Opal M. (Crippin) Turner. Thomas married Ella May (Hornaday) Turner on June 19, 1953 and she preceded him death on September 7, 2007. Thomas was a 1945 graduate of Rushville High School. He then went on to service his country in the United States Army during World War II. Thomas received his tool design engineering degree which lead him to his career at Western Electric for over 33 years. He was a member at First Presbyterian Church. Thomas served as a Deacon and helped with Sunday school in the First Baptist Church. He enjoyed bowling, pitching horse shoes at different fairs, and was an AT &T pioneer volunteer. Thomas was known for his special ability to play all different kinds of instruments and writing poetry which was approved for publications. Thomas is survived by his sons, Joey (Carolyn) Turner of Greenfield, Gary (Mi Ok) Turner of Greenfield, Andy (Missy) Turner of Greenfield, and his daughter, Vickie (Jack) Fussner of Connersville; brother, Lynn (Sharon) Turner of Arlington. He will also be missed by his 8 grandchildren, Thomas P. (Rachel) Turner II, Joey L. (Serenity) Turner, Amanda (Ryan) Lovins, Clifton Fussner, Chloè Westra, Bella Turner, Felicity Turner, Drew Turner; 5 great –grandchildren, and several nieces and nephews. Thomas is preceded in death by his parents, wife, and siblings, Olvir Turner, Raymond Turner, Ira Turner, Claude Turner, Mary Springman, Ruth Shipley. Visitation will be held on Monday, September 7, 2020 from 6 PM-8PM in Moster Mortuary. Private services will be held for the family. Burial will follow in Richland Cemetery. In lieu of flowers the family would like donations to be made towards First Presbyterian Church.

Thomas P. Turner, 93 lifelong resident of Rushville, passed away on September 4, 2020. He was born on December 12, 1926 in Rush County, IN to the late Raymond and Opal M. (Crippin) Turner. Thomas married Ella May (Hornaday) Turner on June 19,... View Obituary & Service Information

The family of Thomas P. Turner created this Life Tributes page to make it easy to share your memories.

Send flowers to the Turner family.