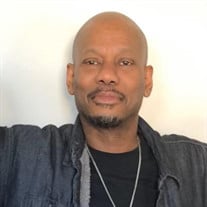 Stephen Burnett AKA “Cool Rock”, 53, of Rushville, passed away on May 15, 2021, in Indianapolis. He was born on February 13, 1968, in Connersville to Steven Burnett and Stephanie (Gibson) Smith. Cool Rock married Katherine “Kathy” (Cooper) on February 12, 2003 and she survives. He enjoyed dancing specifically the dance Hambone, cooking and spending time with his children and granddaughters. Cool Rock was known for being able to talk to everybody! He was able to save 2 lives from the donation of his kidneys. Cool Rock’s legacy will be able to live on. Stephen is survived by his parents, wife, and grandmother, Adell Thomas; son, Isaiah Burnett of Fort Wayne; daughters, Indya Burnett of Rushville and Sierra (Nic) Sisco of Fort Wayne; sisters, A’del Moore & Jasmine Burnett; 3 granddaughters, Amya, Avrie and Alia Sisco; cousin, Anthony Gonzalez, and numerous nieces and nephews. Stephen is preceded in death by his aunts, Collen Burnett and Teresa Gibson; uncle, Johnny Douglas and his friend, Jimmy Coles. Services will be held on Saturday, May 22, 2021 at 1 PM in Moster Mortuary, with Pastor Dennis Perkins presiding. Friends are welcome to visit the family from 11 AM until the time of service in the mortuary. Memorial contributions may be made out to the family.

The family of Stephen Burnett AKA "Cool Rock" created this Life Tributes page to make it easy to share your memories.

Stephen Burnett AKA “Cool Rock”, 53, of Rushville, passed away...