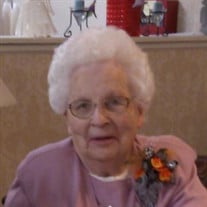 Ruth Ann Gruell, 94, a longtime Rush County resident, passed away May 22, 2020 at Morning Breeze in Greensburg. Ruth Ann was born January 30, 1926 in Rush County to Harley & Beulah (Jinks) Austen. She was a 1943 graduate of New Salem High School. Ruth Ann married Floyd N. Gruell on November 26, 1944 and he preceded her in death on January 29, 2015. Ruth Ann was the ultimate farm wife. She enjoyed raising Hampshire hogs, tending to the dairy cattle and raising corn & soybeans. She raised a large garden and enjoyed using all the fresh produce in preparation of wonderful meals. Sauerkraut making was an activity for many summers. Ruth Ann raised chickens for meat and eggs. One of her specialties was making egg noodles! She was a member of the Little Flatrock Christian Church, the Andersonville OES #93, the Richland Wide Awake Extension Homemakers Club and active in the Rush County Republican Party. Ruth Ann is survived by her daughters, Judy (Bob) Cupp of Greensburg and Janet L. (Robert) Bedel of Greensburg, her son, Terry (Sandy) Gruell of Osgood, her grandchildren, Morgan Cupp, Ryan (Heather) Cupp, Christina (Glen) Koeneman, Susan (Chris) Calabrese, Kurt (Marlena) Bedel, Bruce (Kelly) Bedel and Brian Gruell, 9 great grandchildren and 1 great-great grandson. She was preceded in death by her husband, parents, grandson; Terry Daniel Gruell and brothers; Robert L. & Philip E. Austen. Services will be private at Moster Mortuary, Rushville. Friends are welcome to visit the family from 11AM until 12:30PM on Thursday, May 28, 2020 at the mortuary. There will be an OES service after visitation on Thursday. Burial will be in Rushville's East Hill Cemetery. Memorial contributions may be made to Andersonville OES #93 or to the Rush County Cancer Fund thru RCCF.

The family of Ruth Ann Gruell created this Life Tributes page to make it easy to share your memories.

Send flowers to the Gruell family.