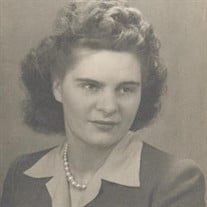 Ruby M. Gipson Shearer, 100, a life long Rushville area resident, passed away November 6, 2020 in Shelbyville. Ruby was born August 22, 1920 in Rushville to Theodore "Dode" and Ethel (Breece) Newman. She married Raymond "Buster" Wright in 1940. He was a pilot during WW2 and was killed during a "dog fight" flying from England to Germany. He left a 2 year old son, Ronnie. Ruby later married Robert Gipson and they had 4 children together and Bob adopted Ronnie. She married Christopher J. Shearer on May 13, 1989 and he preceded her in death on April 5, 1997. Ruby retired from International Furniture Company in Rushville in 1982 after 20 years. She was the only woman in the wood repair department and was quite good at her job. She was baptized in the First Presbyterian Church and was a member of the American Legion and VFW Ladies Aux. and a member of the Rushville Eagles Lodge. She really enjoyed being part of the Wednesday morning Aches & Pains bowling league in Shelbyville. Ruby also enjoyed playing golf and watching sports on television. Ruby will be missed by her daughters, Lynne (Paul) Ralston and Bobbie (Ed) Kerr all of Shelbyville and her sons, Tom (Caron) Gipson of Rushville, Dennis (Donna) Gipson of Prosper, TX and Ronnie (Carolyn) Gipson of Surprise, AZ, 11 grandchildren and 19 great grandchildren also survive. She was preceded in death by 3 brothers, 2 sisters, a step son, James Gipson and a half brother. Services will be held at 1 PM Tuesday, November 10, 2020 in Moster Mortuary, Rushville. Friends are welcome to visit the family at the mortuary from 11am until service time on Tuesday. Burial will be in the Rushville East Hill Cemetery. Kathleen Riddle will preside. Memorial contributions may be made to the Shelbyville Animal Shelter.

The family of Ruby M. Shearer created this Life Tributes page to make it easy to share your memories.

Send flowers to the Shearer family.