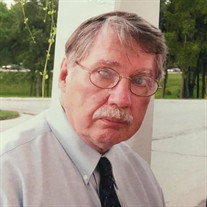 Roy Garland Pedigo, 83, of Madison, Indiana passed away at The Waters of Clifty Falls on February 12, 2022. Roy was born on April 9, 1938, in Warren County, Kentucky to Bonnie (Beard) and Garland Pedigo. Roy is a 1956 graduate of Rushville Consolidated High School. He studied mechanical engineering at the University of Cincinnati and Purdue University. After a short time at Rexnord Corporation in Madison, Roy spent the balance of his engineering career in the power generation industry starting with Marble Hill Generating Station near Hanover, Indiana. He went on to work on numerous power projects and the decommissioning of several Department of Defense and Department of Energy facilities throughout the U.S. He retired from Duke Energy in 2004. Roy loved to work, and he imparted that work ethic to each of his children. He took great pride in his work throughout his life. He had an insatiable curiosity about all-things mechanical and was passionate about problem-solving. He held and contributed to multiple U.S patents that have since been cited and referenced in numerous patent applications in construction products, air emissions, and the pharmaceutical industries. His love of cars, especially Fords, was also a lifelong passion he shared with his family. Mary Carol (Oster) and Roy were married in Rushville, Indiana on December 30, 1962. He served in the Army Reserves for nine years, achieving the rank of Sergeant. Roy was active in and became the President of the Jaycees (a community organization) in Madison in the late-1960s. He contributed to creation of the July 4th/Regatta weekend fireworks display that is now an annual tradition of the Madison Regatta festivities. Roy was preceded in death by his parents. His greatest loves were his wife, family and several loyal canine companions. He is survived by his wife, Mary Carol; children, Cathy Hurrell (James), Mark Pedigo (Susan), Sarah Schroeder (Terry), Susannah Pedigo (Cheryl Winch), and Molly Stalker (Jason); and grandchildren, Rachel Hurrell, Sarah Hurrell, Haley Thomas, Megan Sibley, Nathan Pedigo, Gabriel Pedigo, Sydney Stalker; and four great-grandchildren; siblings Regenia Cooley and Richard Pedigo (Judy); and several nieces and nephews. Services will be held on Friday, February 18, 2022, with visitation from 11:00 am to 1:00 pm and service immediately following at Moster Mortuary, 334 North Main St., Rushville, IN 46173 with Pastor John Wall presiding. Burial will be held at East Hill Cemetery immediately following service. Memorial contributions may be made to either the Moran Eye Center of the University of Utah for research in age-related macular degeneration (https://healthcare.utah.edu/moran/) or the Rushville Animal Shelter (www.rushvilleanimalshelter.org).

Roy Garland Pedigo, 83, of Madison, Indiana passed away at The Waters of Clifty Falls on February 12, 2022. Roy was born on April 9, 1938, in Warren County, Kentucky to Bonnie (Beard) and Garland Pedigo. Roy is a 1956 graduate of Rushville... View Obituary & Service Information

The family of Roy Garland Pedigo created this Life Tributes page to make it easy to share your memories.

Roy Garland Pedigo, 83, of Madison, Indiana passed away at The...

Send flowers to the Pedigo family.