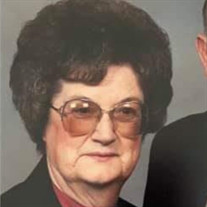 Rosemarie Gordon passed away on June 4, 2020 at Flatrock River Lodge in Rushville. She was the fourth daughter of Russell and Della (Hufferd) Orme, born on February 7, 1929 in Posey Township. She graduated from Arlington High School in 1947 and married Franklin Gordon on May 17, 1947. They were married for 58 years. They raised 4 children on farms outside of Arlington and Manilla. She helped with the farm work, keeping the books, running for parts and fixing big dinner for the farm hands. She was available to cut hair and give perms if you needed one. She worked a short while at the Country Fare in Homer and later worked in home health care in Rush and Shelby Counties. She grew up playing piano by ear and would play at church and in nursing homes. She was a member of the Arlington Christian Church since 1950 and was involved in the music, missions, teaching Sunday school and youth groups. She and her husband would host parties and hayrides for the youth. They also opened their home for missionaries or young preachers to stay who would be visiting the church for a weekend. She started a family quartet called "The Happy Gordon Family” in the 1970’s while one son was away in Vietnam. They would sing at churches on the weekends and for revival services. It was one of the highlights of her life. She was on the church prayer chain and had a card ministry. She loved children and would keep neighborhood children and grandchildren after school for many years. There would always be children in the house on weekends to help parents have a date night. She would care for her husband many years before his passing in 2004. Rosemarie is survived by her sons, Steven (Carolyn) Gordon of Manilla, IN and Max (Diana) Gordon of Greenfield, IN; daughter, Marsha (Ron) Noble of Fairland, IN; sister, Norene Martin of Indianapolis, IN. Also surviving are 12 grandchildren and 25 great-grandchildren; many nieces and nephews. Rosemarie is preceded in death by her parents, husband, son, William R. “Bill” Gordon; grandson, Tony Dixon; nephew, Larry Gordon; sisters, Kathleen McJunkin, Bernice Gordon, Margery Drake; brother, Glenn Orme; and daughter-in-law, Penny Gordon. Services will be private at Moster Mortuary, Rushville. Friends are welcome to visit the family at the mortuary on Tuesday, June 9, 2020 from 11AM-1PM. Burial will be in Arlington East Hill Cemetery. In lieu of flowers, donations may be sent to the Arlington Christian Church. Pastor’s David Drake and Gary Holt will preside.

Rosemarie Gordon passed away on June 4, 2020 at Flatrock River Lodge in Rushville. She was the fourth daughter of Russell and Della (Hufferd) Orme, born on February 7, 1929 in Posey Township. She graduated from Arlington High School in 1947... View Obituary & Service Information

The family of Rosemarie Gordon created this Life Tributes page to make it easy to share your memories.

Rosemarie Gordon passed away on June 4, 2020 at Flatrock River...

Send flowers to the Gordon family.