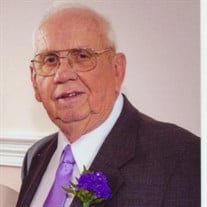 Robert Neil Veatch, 92, a lifelong Rush County area resident, passed away July 12, 2021 in Shelbyville. Bob was born March 21, 1929 in Rush County to Oren F. & Mabel (Hiner) Veatch. He was a 1947 graduate of Arlington High School. Bob married Mary Lou Stewart on October 1, 1950 and she survives. Bob was a lifelong farmer in Walker & Posey Townships in Rush County. The Veatch family farm has been in the family since 1875 and received the Hoosier Homestead Award. Bob also owned & operated Veatch Trucking. He had been a faithful 62 year member of the Arlington Christian Church where he had served as Board chairman, Elder, Deacon and Secretary. Bob had a great love of music and was still playing his alto sax until just last year. His family was his pride and joy and his grandkids and great grandson would always bring a twinkle to Pap’s eye! Bob also enjoyed watching IU basketball and the Cincinnati Reds! Bob was very active in his community. He was a former director of the Rushville National Bank and Rush County REMC, he had served as a 4-H Club Leader, was a Charter member of the Arlington Lions Club and a former board member of the Rush County Farm Bureau. Bob was a member of the 1946-1947 Arlington High School County & Sectional basketball champs and a member of the Southeastern Lions All-Star Basketball team. He was scorekeeper for the Arlington Wildcats for 21 years. Bob is survived by his wife; Mary Lou, of Rush County, his sons; Marcus R. (Cynthia) Veatch of Indianapolis and Marvin (Beth) Veatch of Seymour, a daughter; Marla Jane (Michael) Davis of York, PA., a sister; Janet Weber of Rush County ;grandchildren; Meredith (Travis) Behler, Katherine Veatch and Michael Robert Davis & Matthew Stewart Davis and great grandson; Grayson Davis Behler. Bob was preceded in death by his parents and an infant sister; Judith Veatch. Services will be held at 11 AM Saturday, July 17, 2021 at the Arlington Christian Church with Gordon Mahaffey & Gary Holt presiding. Friends are welcome to visit the family from 4-8 PM on Friday, July 16, 2021 at Moster Mortuary, Rushville and from 10 AM until the time of the service on Saturday, July 17, 2021. The family strongly encourages masks for all unvaccinated visitors. Burial will be in the Rushville East Hill Cemetery. In lieu of flowers, memorial contributions may be made to the Robert & Mary Lou Veatch Family Fund thru RCCF or to the Arlington Christian Church.

The family of Robert Neil Veatch created this Life Tributes page to make it easy to share your memories.

Send flowers to the Veatch family.