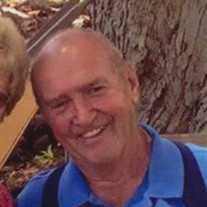 Robert “Bob” Hadler, 80 of Rush County, passed away on December 23, 2018 in Indianapolis. He was born on July 29, 1938 in Fayette County, IN to the late Earl and Frances (Swango) Hadler. Bob was a 1957 graduate of Connersville High School. He married Ethel (DeRegnaucourt) Hadler on May 5, 1961 and she survives. Bob was a school bus driver for Rush County over 35 years. He was a farmer all his life. Bob loved horses, John Deere, and antiques. He enjoyed his time with his family and friends. In addition to his wife Ethel, Bob is survived by his children, Mike Hadler of Carthage, Gary (Brenda) Hadler of Carthage, and Kim (Henry) Simmons of Greenfield; sister, Carol (Bill) Ott of Connersville; brother-in-law, Don Carlton of Orange, brother, Don Hadler Connersville. He will be missed by his grandchildren, Jessica (Brandon) McDaniel, Garrett Hadler, and Erika (Stephen) Sever; great-grandchildren, Brent and Lauren McDaniel, Mackenzie, Abby, and Elizabeth Sever. Bob is preceded in death by his sister, Maxine Carlton. Services are being held on Saturday, December 29, 2018 at 10:30 AM in Center Christian Church, with Pastor Darryl Denney presiding. Friends are welcome to visit the family from 4 to 8 PM in the church on Friday, December 28, 2018. Burial will be at a later date in Glen Cove Cemetery. Memorial Contributions may be made out to St. Mary Catholic Church or to Arthritis Foundation.

The family of Robert "Bob" Hadler created this Life Tributes page to make it easy to share your memories.

Robert “Bob” Hadler, 80 of Rush County, passed away on December...

Send flowers to the Hadler family.