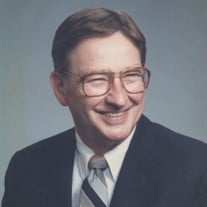 Robert R. (Bob) Foster of Rushville died Sunday, November 15, 2020. He was 92. Bob was born in Pittsburgh, Pennsylvania on May 16, 1928. He was the son of Horace Foster, Jr. and Dorothy Sparks Foster, both deceased. Bob married Sharlene Kirkpatrick Burns on March 27, 1982. They had many good years together. She survives. Bob had been a Rush County resident for most of his life. He graduated from Rushville High School in 1946 and Indiana University in 1950 where he was a member of Beta Theta Pi fraternity. He was a veteran of the Korean Conflict, serving with the 1st Calvary Division during 1951 and 1952. Bob had been a civilian Senior Systems Analyst with the Department of the Army, retiring in 1990 following 33 years of service. He had been assigned to a number of locations in the United States and Europe ending his career at Ft. Benjamin Harrison in Indianapolis. He belonged to St. Paul’s United Methodist Church and was a member of the Rushville Elks Club. During the 1950s he had been a high school sports official had been a minor league baseball umpire with the Florida State and the Arizona-Mexico leagues. He was one of the founders and first president of the Rushville Little League. Bob was a kind man who was liked by everyone. He was a loving husband, a good father and grandad, and a true gentleman. He will be so missed by his family. Besides his wife, he is survived by daughter Nancy Trimarco and husband Randy, Greenfield, IN; son David Foster and wife Theresa, Delmar, PA; two stepsons Brian Burns and wife Elizabeth, Indianapolis, IN; Bruce Burns and wife Karen, New Lenox, IL; and stepdaughter Brenda Burns, Portage, IN. Grandchildren Ben, Joe, Jonathan, Jordan Burns, and Evelyn, Amanda, and Matthew Foster also survive. Bob was preceded in death by his brother James Foster, and sister-in-law Ruth Ann Foster. The family has requested that, in lieu of flowers, memorial contributions be made to the Rush County Community Foundation, Rush County Victim’s Assistance or to St. Paul’s United Methodist Church. Due to Covid 19 a private memorial service will be held. Moster Mortuary Rushville entrusted with arrangements.

Robert R. (Bob) Foster of Rushville died Sunday, November 15, 2020. He was 92. Bob was born in Pittsburgh, Pennsylvania on May 16, 1928. He was the son of Horace Foster, Jr. and Dorothy Sparks Foster, both deceased. Bob married Sharlene Kirkpatrick... View Obituary & Service Information

The family of Robert R. Foster created this Life Tributes page to make it easy to share your memories.

Send flowers to the Foster family.