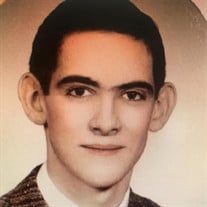 Richard Allen Henderson, lifelong resident of New Salem, passed away May 19, 2019. Born February 9, 1942, to Robert (Bob) and Lottie Henderson, Richard grew up in and around New Salem where he graduated from New Salem High School in 1960. His parents and sister Joyce (Henderson) Angle preceded him in death. Richard enlisted with the Army National Guard in 1964 and received his infantry training in Grayling, Michigan. He remained in active service until 1970. Upon returning to civilian life, he was employed at International Furniture (Schnadig) in Rushville, Indiana, where he worked until the factory closed. Richard also worked at KT Industries in Shelbyville, Indiana, until his retirement in 2007. Richard is best remembered for his quiet and gentle nature. He had a fascination with history,especially researching his family history connected with the American Civil War and World War I. His careful and precise attention to detail shone in his gunsmithing ability. From selecting the perfect piece of maple for a stock to the fine engraving on the metal plating, Richard crafted custom muzzleloaders that remain works of art. Richard was a fine marksman, too, having won many state and regional shooting events with pistols and muzzleloaders. A perfect afternoon involved going to Friendship, Indiana, or visiting with fellow muzzleloaders in the Wahpanipe Muzzleloaders Club. His marksmanship also applied to his bowling as dozens of trophies and plaques celebrate league victories and perfect games. He so enjoyed spending time with his fellow shooters and bowlers--with or without a contest involved. Richard is survived by nieces Jan (Steve) Thoman and Kris (Michael, Jr.) Sasher; great nieces and nephew Erika and Megann Sasher, and William, Anne, and Katie Thoman; brother-in-law William Angle all of Rushville, and several cousins residing in Indiana and Kentucky. Graveside services will be held at Fisher Cemetery on June 1, 2019, at 10:00, followed by a Celebration of Life gathering for friends, neighbors and family held at New Salem United Methodist Church Educational Building. Memorial contributions may be made to the Wahpanipe Muzzleloaders Club or to the Rush County Community Foundation.

Richard Allen Henderson, lifelong resident of New Salem, passed away May 19, 2019. Born February 9, 1942, to Robert (Bob) and Lottie Henderson, Richard grew up in and around New Salem where he graduated from New Salem High School in 1960. His... View Obituary & Service Information

The family of Richard Allen Henderson created this Life Tributes page to make it easy to share your memories.

Send flowers to the Henderson family.