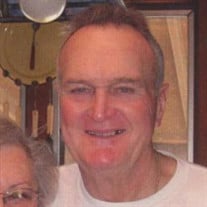 Richard Eckel, 86 of Rushville, passed away on July 8, 2020 in Rushville. He was born on March 14, 1934 in Rushville to the late Florentine and Ruth (Bennett) Eckel. Richard was a 1952 graduate of Rushville High School. He married his high school sweetheart Delilah Mae (Allen) Eckel on June 15, 1953 and she survives. Richard was a graduate of Rutgers University. Upon graduation he was a five star athlete and signed with the Detroit Tigers. Richard still played tennis and softball for much of his adult life. He was in the U.S. Army Reserves for 6 years. Richard was a member of Center Christian Church. Richard started working at Rushville National Bank in 1956 as a collector and worked his way up to bank president and board member before retiring after 35 plus years. During that time he was also instrumental in bringing Fujitsu 10 to Rushville. He was on the board of Chamber of Commerce and also served as president. Richard was citizen of the year. Richard organized for several years what was the 2nd biggest parades of Indiana for the annual car show and bands from all over eastern US with blimps and Clydesdales. He was the first original member of the Boys Club and served on the board for several years. Richard was a member of the Elks Lodge, past member of Breakfast Optimist Club and Rotary. He organized several benefits for individuals in need. Richard participated in many Rush County Players productions and member Rush County Stock Club. Richard loved his Chicago Bears & Cubs and Indiana Pacers & IU. He also loved his 4 cats, Hemi, Snickers, Sugar and Goldie. Richard was known for his love of cars, mainly all things MOPAR. He has been a car collector for over fifty years. Richard considered his family as his greatest accomplishment and his 67 year marriage to his high school sweetheart. In addition to his loving wife, Delilah (Allen) Eckel, he is survived by his daughters, Deloris (Garry) Hickman and Cheryl Eckel, daughter-in-law, Karrie Eckel; grandchildren, Aaron (Treva) Hickman, Amanda (Jim) Draper, Shannon Herrell, Heather (Trevor Kelley) Eckel and great-grandchildren, Austin Hickman, Alexis Hickman, Duncan Draper, Devan Draper, Delaney Draper, Ezra Allen Eckel, Brooke Herrell and Brayden Herrell. Richard is preceded in death by his parents, son, Richard Allen Eckel and daughter, Kathleen Louise Eckel. Services will be held on Monday, July 13, 2020 at 1 PM in Center Christian Church, with Pastor Darryl Denney presiding. Friends are welcome to visit the family from 11 AM until the time of service in the church. Burial will be held in Calvary Cemetery. Memorial contributions may be made to Rushville Parks Department, Rushville Animal Shelter, Rushville Boys and Girls Club, or Center Christian Church. Richard loved people, life, and being happy.

Richard Eckel, 86 of Rushville, passed away on July 8, 2020 in Rushville. He was born on March 14, 1934 in Rushville to the late Florentine and Ruth (Bennett) Eckel. Richard was a 1952 graduate of Rushville High School. He married his high school... View Obituary & Service Information

The family of Richard F. Eckel created this Life Tributes page to make it easy to share your memories.

Send flowers to the Eckel family.