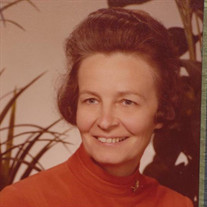 Rae Aljean Bender, 93 of Franklin County, passed away on December 24, 2019 in Indianapolis. She was born on January 27, 1926 in Franklin County, IN to the late Howard and Grace (Robbins) Herrmann. Jean attended New Salem High School and God’s Bible School in Cincinnati. She graduated from Arsenal High School in Indianapolis. Rae traveled around the country doing evangelistic work with God’s Bible School and met her husband, Paul Bender in Indianapolis. Jean married Paul on September 1, 1946 and he preceded her in death on November 7, 2011. Together they raised three children and she later worked with Paul in the business they owned and operated, Commercial Features Recording Studio. While in Indianapolis, she was an active member of Free Methodist Churches and when they retired to Franklin County she attended Clarksburg Covenant Church. Jean was a woman of strong faith and generous heart. She opened her home to many people over her lifetime. Her gregarious, independent and caring spirit drew people to her. She was an avid reader and among her interests were religion, politics, science, and homemaking. Words cannot express what a wonderful mother, grandmother, caregiver and friend she was. Jean is survived by her son, Paul D. (Vickie) Bender of Indianapolis, IN; daughters, Rebecca Bender of Indianapolis and Fran Bender –Colassaco of Indianapolis; brothers, Donald Herrmann of Laurel and Jerry Herrmann of Marion; sisters, Anita (Everett) Quinton of Laurel and Doris Williams of Ohio. She will also be missed by her grandchildren, great-grandchildren, and one great-great grandchild. Jean is preceded in death by her parents, husband, and sister, Lois Noah. Services will be held on Monday, December 30, 2019 at 11 AM in Moster Mortuary. Friends are welcome to visit the family from 10 AM until the time of service in the mortuary. Burial will be held in Lincoln Memory Gardens in Zionsville, IN. Memorial Contributions may be made to Clarksburg Covenant Church. Arrangements entrusted to Moster Mortuary.

Rae Aljean Bender, 93 of Franklin County, passed away on December 24, 2019 in Indianapolis. She was born on January 27, 1926 in Franklin County, IN to the late Howard and Grace (Robbins) Herrmann. Jean attended New Salem High School and God&#8217;s... View Obituary & Service Information

The family of Rae Aljean Bender created this Life Tributes page to make it easy to share your memories.

Rae Aljean Bender, 93 of Franklin County, passed away on December...

Send flowers to the Bender family.