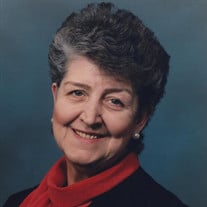 Phyllis Ann Snyder, 80, a longtime Rush County and Morristown resident passed away Saturday, December 8, 2018 in Rushville. Phyllis was born in Indianapolis, IN on February 5, 1938 to the late Harold Robert and Irene Elizabeth (Martin) Schrier. Phyllis was a 1956 graduate of Arlington High School. She was an Executive Secretary at American Red Ball and also worked at the Sears Parts Center, H&R Block and the Indianapolis Chamber of Commerce. Phyllis was a member of the Morristown Nazarene Church. Phyllis is survived by a son, Kevin Snyder and wife Marcia of Rushville, daughter, Debbie Smith of Columbus, OH, brother, Ed Schrier and wife Shirley of Brownsburg, IN, sister, Darlene Kay Fields of Orlando, FL, 3 grandchildren, James Kevin Snyder and wife Tracey, Daniel Robert Snyder and fiancé Allison (Maurer), Melinda Christine Shade and several nieces and nephews.. Services will be held at 1 PM Tuesday, December 11, 2018 at Moster Mortuary, Rushville. Pastor Patrick Smith will preside. Friends are welcome to visit from 11 AM until the time of service that same day at the mortuary. Burial will follow in Arlington East Hill Cemetery. Memorial contributions may be made to Our Hospice of South Central Indiana.

The family of Phyllis Ann Snyder created this Life Tributes page to make it easy to share your memories.

Send flowers to the Snyder family.