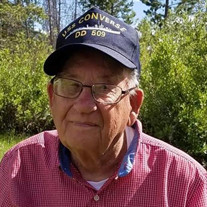 Paul Stagg, 94, a longtime Rushville resident, passed away April 6, 2019 in Wyoming. Paul was born December 1, 1924 in Holton, IN. to the late Hollis Henry & Ethel (Brown) Stagg. He lived his early life in Holton before his family moved to Decatur County. Paul was a WW2 US Navy veteran and served in the South Pacific aboard the USS Converse. He married Avanell Adkins on June 27, 1947 and she preceded him in death on June 20, 1991. Paul & Avanell called Rushville their home but they also fell in love with the West and spent a lot of time in Wyoming over the years. Paul & Avanell owned & operated Dairy Queen, now Stagg's Dairy Treats, from 1960-1988. Paul was a founding and charter member of the Rushville Church of Christ. He was an avid outdoorsman enjoying hunting and fishing. He loved to travel and have "picnic Sundays". Fried chicken was at the top of his favorite food list! He lived his life to the fullest and will always be known for his favorite quote..."Live your life with no regrets!" He will be missed by his daughters, Carol Stagg (Michael Wicker) of Dubois, WY and Marsha (Jay) Haley of Falmouth, his sons, Gary Stagg of Naples and Jerry (Carol) Stagg of Brazil, his grandchildren, Doug (Kathy) Stagg, Ryan (Amy) Stagg, Julie Miramonti, Jeff (Nichole) Stagg, Brad Gwinnup, Jaymie Haley, Ashley (Shohn) Busald, Scott Haley, Jason (Susan) Haley, Amelia (Paul) Marlatt and Ragen Stagg, 17 great grandchildren also survive. In addition to his parents and wife, Paul was preceded in death by his brothers, John & Wilmer Stagg, and a sister, Mable Swinford. Services will be held at 11 AM Monday, April 15, 2019 at the Rushville Church of Christ with Don Heller presiding. Friends are welcome to visit from 2-6 PM Sunday, April 14, 2019 in Moster Mortuary, Rushville. Burial will be in the Arlington East Hill Cemetery. Military honors will be provided by the Rush County Veteran's Honor Guard. Memorial contributions may be made to the Rushville Church of Christ or to the RCCF-Paul & Avanell Stagg Fund.

Paul Stagg, 94, a longtime Rushville resident, passed away April 6, 2019 in Wyoming. Paul was born December 1, 1924 in Holton, IN. to the late Hollis Henry & Ethel (Brown) Stagg. He lived his early life in Holton before his family moved to... View Obituary & Service Information

The family of Paul Stagg created this Life Tributes page to make it easy to share your memories.

Send flowers to the Stagg family.