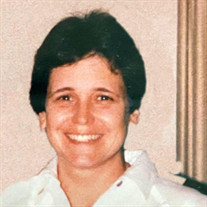 Obituary: Patricia Joan (“Jo”) Rose, born February 27, 1950, Rushville, Indiana; died September 21, 2020, Indianapolis, Indiana. Gifted athlete, devoted daughter, supportive big sister, loving and much-loved niece, cousin, aunt, great aunt, friend, and partner, our dear Joan departed this Earthly existence after a brief illness in the gentle surroundings of St. Vincent Hospice, Indianapolis. She was the daughter of Edwin Rose and Gladys Honaker Rose, and was later the loved step-daughter of John Fishell. Her sister Jean Ann Rose (Owens) preceded Joan in death, and we rejoice that these two siblings can once again be inseparable. She leaves behind a grieving family, including two sisters and their husbands, Janette Fishell and Richard Larnach, Julie Fishell and Irwin Appel, Jean’s widower Michael Owens, nieces and nephews, great nieces and great nephews, aunts, uncles and cousins. Her sisters are most grateful to niece Emmy Owens and her children Sawyer and Celia Morgan, with whom Joan lived for the final chapter of her life, and our Aunt Linda Honaker who was Joan’s confidant to the very end. All of her family and friends will forever miss her innumerable kindnesses and middle of the night text emojis. Joan was truly a mid-century modern woman who lived life on her own terms. As her mother observed, “Joan marches to the beat of a different drum.” From her earliest years it was clear that Jo was a gifted athlete; throughout her Webb Elementary, Rushville Junior High, and RCHS years she could be found on the baseball diamond, the basketball or tennis court, golf course, or bowling alley, playing, and many times outplaying, the boys. She played trumpet and guitar, won awards for her poetry, and was a fine photographer. She was baptized in St. Paul United Methodist Church, Rushville, and found a deep spiritual connection in later life at The Episcopal Church of All Saints, Indianapolis. Golf was her passion and, had circumstances been different in her life, she could have made it her career. It became an avocation that she shared with those she loved, teaching her sister Julie the game, enjoying recent matches with cousin Ted, and having the best rounds of her life with her uncles Carl and Quincy Honaker. Joan was employed by several companies, including Western Electric, Agere Systems, and Cook Medical, and completed training in electrical engineering. Her work took her to Indianapolis, Denver, Orlando and Winston-Salem, but in 2009 she returned to live in Rush County where she enjoyed close connections with her Indiana-based family. She and Jean took advantage of this and traveled to Bloomington to have lunch with Janette at the Irish Lion as often as possible. Jo loved her dogs, each of whom she regarded as her child and all of whom repaid that love a thousand-fold; she was mad about cars and was very proud of her red Mustang convertible which she could be seen driving up Meridian Street in Indianapolis, mid-winter, top down with the heater on. She was a champion of children and those who had fallen on hard times, sharing both her compassion and resources as best she could with those in need. Even to end she possessed a childlike joy which shone forth even in times of physical pain, as witnessed by her singing “Oh, Happy Day,” just days before her death. She also had a wicked sense of humor, which endeared her to the nurses and doctors at St. Vincent Hospice, who were glad to have such a bright spark in their midst. It is with profound thanks to her dedicated hospice caregivers that Joan’s family has designated memorial donations be made to St. Vincent Hospice, 8450 N. Payne Rd., Suite 100 Indianapolis, IN 46268. A service honoring her life will be held at The Episcopal Church of All Saints, Indianapolis, at a future date which allows for congregational singing, as Joan would not have it any other way. Moster Mortuary is entrusted to the arrangements.

The family of Patricia Joan Rose created this Life Tributes page to make it easy to share your memories.

Send flowers to the Rose family.