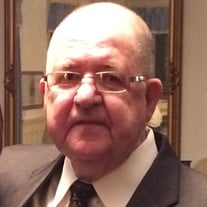 Ora DeWayne “OD” Thurman, 80, of Camby and formerly of Connersville, passed away August 21, 2018 in Indianapolis. Ora was born in Winslow, IN on February 14, 1938 to the late Ora Condo “OC” and Monta (Jones) Thurman. Ora was a 1956 graduate of Winslow High School. He married JoAnn Grizzel in December of 1958 and she survives. Ora retired in 1999 as an inspector from Ford in Indianapolis after 42 years. He was a member of the Masonic Lodge over 50 years, the last several had been with the Warren Lodge #15 F & AM. He was also a member of the OES, Murat Shrine & Scottish Rite Lodge. He loved playing cards and working jigsaw puzzles. Ora enjoyed a good road trip and seeing all the sites along the way. In addition to his wife, JoAnn, Ora is survived by his son, Monty Ray (Dianne) Thurman of Shelbyville, his daughter, Michele “Shelly” (Randy) Gill of Indianapolis, brothers, Gary (Ilene) Thurman of Arkansas, Roger (Lynn) Thurman of North Carolina and Tom (Marty) Thurman of Florida. He will be missed by his grandchildren, Arika (Michael) Hart and Joshua DeWayne (Lauren) Thurman, 2 step grandchildren, Emily and Alex Springer and great grandchildren, Taylor Carter, Makensy Hart , Jordan Carter and Natalie Kassoumis. He was preceded in death by a brother, Bob Thurman. Visitation will be held on Friday, August 24, 2018 at Moster Mortuary, Rushville from 4-7 PM. A Masonic Service will be observed at 7 PM. Burial will be held privately in the Orange Cemetery.

The family of Ora DeWayne "OD" Thurman created this Life Tributes page to make it easy to share your memories.

Ora DeWayne “OD” Thurman, 80, of Camby and formerly of Connersville,...

Send flowers to the Thurman family.