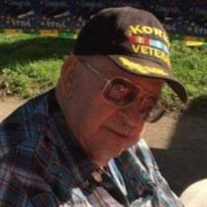 Melvin L. Hensley, 86, a longtime Rushville resident, passed away June 18, 2019 in Rushville. He was born August 30, 1932 in Union County, IN to Melvin Hensley & Elizabeth (Hampton) Stanton, both deceased. He married Wanda Cope on September 24, 1952 and she preceded him in death on September 26, 1997. Melvin was a US Army veteran of the Korean War. He retired from INDOT in 1996 after many years of service. Melvin was a member of the Rushville American Legion, FOP, Eagles Lodge and the VFW. He was an avid fisherman and enjoyed watching the Cincinnati Reds. He is survived by his sons, Tim (companion Lisa) Hensley of Spiceland and Tom (Jennifer) Hensley of Shelbyville, his daughters, Peggy Jackson and Tina (Ed) Revalee all of Rushville and Lori (Shane) Seyer of Homer, a sister, Carol Hensley of Richmond, 15 grandchildren and 13 great grandchildren. Melvin was preceded in death by his parents, his wife, 2 sons, Dennis & Calvin Hensley, brothers, Charles & Frank Hensley, sisters, Rose, Zori, Sally & Georgie and grandchildren, Robbie Hensley, Adam Jackson & Zoe Gordon. Services will be held at 1 PM Friday, June 21, 2019 in Moster Mortuary, Rushville with George Huff presiding. Friends are welcome to visit the mortuary from 4-8 PM Thursday evening, June 20. Burial will be in Rushville's East Hill Cemetery. The Rush County Veteran's Honor Guard will provide military rites at the mortuary.

The family of Melvin L. Hensley created this Life Tributes page to make it easy to share your memories.

Send flowers to the Hensley family.