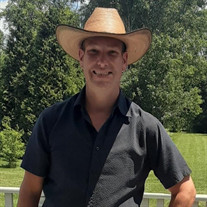 Matthew E. “Matt” Halcomb, 40, of Rushville, passed away on August 30, 2020. He was born on November 21, 1979 in Rushville, IN to Elton and Susan (Barton) Halcomb. Matt was a 1999 graduate of Rushville Consolidated High School and then went onto University Northwestern of Ohio for automobile technology in 2001. He married Danielle (Balser) Halcomb on October 19, 2013 and she survives. Matt recently was employed as a correspondence coordinator for the U.S. Government – a mailman in Rushville. He previously worked as a jailer for the Rush County Sheriff’s Department and did landscaping for Vogel’s Florist & Landscaping. Matt attended Church of Nazarene in Rushville. He loved being outdoors, camping, and concerts. Matt’s love for adventure went with anything he did in life from traveling or being with family. He adored spending time with his family and friends. In addition to his wife, Danielle, he is survived by his parents, Elton and Susan (Barton) Halcomb; daughters, Payton Black, McKinlee Halcomb, and Adaline Halcomb; sister, Cheryl (fiancé, Steven Schott) Robinson of Rushville. He will also be missed by his mother-in-law, Darla (Jason) Dwenger, father-in-law, James (Charlene) Balser, sister-in-law, Sasha (Cory) Howard, brother-in-law’s, Christopher Dwenger, Stephen Dwenger, and Austin Dwenger; and his special parents, Kevin (Marcia) Snyder of Rushville; nieces and nephews, Tessa Schott, Casey Robinson, Grace Burns-Schott, Savannah Danforth, Bentlee Howard and Briggslee Howard; and several aunts and uncles. Matt is preceded in death by his grandparents and uncle, Melvin “Mel” Barton. Visitation will be held on Thursday, September 3, 2020 from 6 PM- 8:30 PM in Moster Mortuary. Private Services will be held for the family of Matt. Burial will be held in Glen Cove Cemetery. Memorial contributions may be made to a Trust Fund that will be set up for the daughters.

The family of Matthew E. Halcomb created this Life Tributes page to make it easy to share your memories.

Send flowers to the Halcomb family.