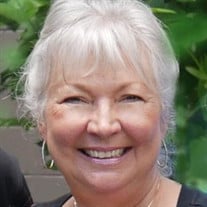 Mary Beth Moster Scott, age 74, passed away after a long illness on February 10, 2019 at Methodist Hospital in Indianapolis. She lived in Carmel, IN with her husband, Jerry D. Scott. She and her husband attended Genesis Church of Carmel. She had three children with her first husband Stephen A. Moster (deceased) and seven grandchildren. Her son, Jeff Moster, and wife, Chrysa, live in Chicago with children, Alexa, George, and Stella. Her daughter, Debbie Aikman, lives in Carmel with children, Emma and Michael. Her daughter, Angie Fresch, lives in Evanston, IL with husband, Marino, and children, Nicholas and Christopher. Her husband has two sons. Jeff Scott lives in Danville, IL, and Jon Scott lives in Ft. Lauderdale, FL. She was born on February 25, 1944, in Rushville, IN. Her parents were Tom and Donletta Mattox of Rushville (both deceased). Her sisters are Beverly Anthony of Westfield, married to James R. Anthony, and Judy Timberman of Nora, widow of Frederic T. Timberman. She graduated from Rushville High School and Indiana University. She lived with her family in Lebanon, IN for almost two decades. She worked as a freelance writer, editor, and editorial consultant for about 20 years. She wrote dozens of magazine articles for local, regional, and national magazines. Her books include Living With Cancer, When Mom Goes to Work, and The Valley is Bright (with Nell Collins). She served as editorial consultant working with James E. Lingeman for Urinary Calculi: ESWL, Endourology, and Medical Therapy, Shock Wave Lithotripsy: State of the Art, and Shock Wave Lithotripsy 2: Urinary and Biliary Lithotripsy. She served as editor of By God’s Amazing & Enabling Grace by James Richard Anthony. She served as associate editor of The Indiana Daily Student and was president of the Indiana University School of Journalism Alumni Association. She received the 1985 Indiana State Medical Association Journalism Award and the 1986 Community Appreciation for Service in Public Enlightenment and Relations (CASPER) award from the Community Service Council of Metropolitan Indianapolis. She received the Rushville High School Distinguished Alumni Award in 1987. In 1995 she won an award for her unique contributions to the success of Lilly Research Laboratories. She retired in 2007 from Eli Lilly after working there for 17 years. At Lilly she was a medical science writer, clinical research associate, and team leader. Following retirement, she and her husband traveled extensively and enjoyed time with their children and grandchildren. Those who knew her will remember her radiant smile, positive energy and how much she loved spending time with family and friends. Visitation and funeral services will be at Leppert Mortuary, 900 N. Range Line Road in Carmel. Visitation will be held on Sunday, February 17 from 2:00 – 6:00 p.m. Funeral services will be on Monday, February 18 at 11:00 a.m. She will be buried following the funeral service at Poplar Ridge Cemetery on Six Points Road in Carmel. To share a memory, please visit www.leppertmortuary.com.

Mary Beth Moster Scott, age 74, passed away after a long illness on February 10, 2019 at Methodist Hospital in Indianapolis. She lived in Carmel, IN with her husband, Jerry D. Scott. She and her husband attended Genesis Church of Carmel. She... View Obituary & Service Information

The family of Mary Beth Moster Scott created this Life Tributes page to make it easy to share your memories.