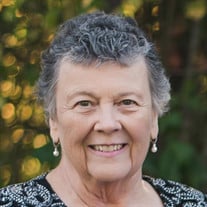 Mary Jo Lovett, 70 of Rush County, passed away on April 2, 2020 in Rush County. She was born on December 28, 1949 in New Castle, IN to Alton and Lucretia (Oldham) Gordon. Mary Jo was a 1968 graduate of Rushville High School and a 1972 graduate of Indiana University where she received her Bachelor's Degree in Physical Therapy. She married James R. Lovett on June 9, 1979 and he survives. Mary Jo is a member of Raleigh Christian Church. She enjoyed time spent with her family, and most of all her grandchildren. Mary Jo loved horses, traveling, and working as a Physical Therapist which she did for over 42 years. She began her career at Parkview Hospital in Fort Wayne, IN from 1972-1979. She then moved to Bangor, Maine where she worked at the Elizabeth Levinson Center. She returned to Indiana and began working for East Central Special Services from 1980-1991. Mary Jo finished her career at Ball Memorial Pediatric Rehab from 1991-2014. In addition to her husband, James, she is survived by her sons, Benjamin (Debbie Kuhn) Lovett of Fishers, IN and Zachary (Kendra McClure) Lovett of Fishers, IN; and sister, Ruth (Tom) Armstrong of Indianapolis, IN. She will be missed by her 7 grandchildren, Olivia Lovett, Alaina Lovett, Shay Lovett, Myles Lovett, Landen McClure, Elijah McClure, and Bryce DeLong. Mary Jo was preceded in death by her parents and sister, Betty Foley. Graveside Services will be private at Raleigh Cemetery, with Pastor Tony Augsburger presiding. Memorial contributions may be made to Raleigh Christian Church or Community North Cancer Center in Indianapolis. Moster Mortuary has been entrusted with Mary Jo’s services.

The family of Mary Jo Lovett created this Life Tributes page to make it easy to share your memories.

Send flowers to the Lovett family.