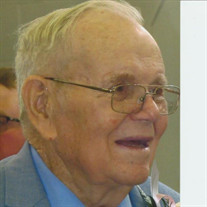 Word has been received of the death of Marvin E. Johnson, 94, of northern rural Rush County on November 24, 2021. Marvin was born to Kenneth and Lisle (McDaniel) Johnson in 1927. Farming was a way of life for the Johnsons as Marvin farmed in Center Township, and with his folks, until his dad’s retirement. Marvin retired from farming in 1994, although they remained in their home on the farm. Marvin graduated from Mays High School in 1945 and continued to farm. He was active in the Indiana Farm Bureau Rural Youth program from 1945-50. Carrying on the farming tradition, Marvin served as Advisor for Farm Bureau from 1950-63. He competed in mechanical corn picking contests and won First Place Champion 1951. He then placed second at the Iowa National Competition. For several years Marvin was a Stewart’s Seed salesman and also ran a crew that constructed Brock grain bins for two years around central Indiana. He first met his one true love, Virginia Hardwick, at a Rural Youth event and they were married 18 months later in 1949. They celebrated 71 years of marriage in June 2020 and Virginia then passed away in August, that year, after a month long illness. Marvin was an active member of Center Christian Church and in his community. He was known for his woodworking skills and hand crafted several custom pieces for his friends, family, and church. He also made and donated dozens of wood cases to display the folded American Flag for service members and their families. Marvin served as a substitute Rural Carrier at the Carthage Post Office from 1982 to his full-time appointment from 1994-97. He also volunteered in the mail room at Hancock Regional Hospital for several years. Survivors include son Mark Johnson of northern New Mexico; daughter-in-law Brenda (Mrs. Larry)Johnson of rural Shelby County and his grandsons Caleb (wife, Jonna) Johnson of Rushville, and Seth (wife, Sophia) Johnson, of rural Shelby County. Also surviving are 5 great-granddaughters and several nieces and nephews. Marvin was preceded in death by his son, Larry R. Johnson, and sister, Juanita Wilson. At Marvin’s request, a private graveside service will be conducted at the convenience of the family. In lieu of flowers or sympathy cards memorial gifts may be given to Center Christian Church, 9112 N County Rd 50 West, Knightstown IN 46148 or to the Center Cemetery fund, c/o Mr. Gail McDaniel at the church.

Word has been received of the death of Marvin E. Johnson, 94, of northern rural Rush County on November 24, 2021. Marvin was born to Kenneth and Lisle (McDaniel) Johnson in 1927. Farming was a way of life for the Johnsons as Marvin farmed... View Obituary & Service Information

The family of Marvin Johnson created this Life Tributes page to make it easy to share your memories.

Word has been received of the death of Marvin E. Johnson, 94,...

Send flowers to the Johnson family.