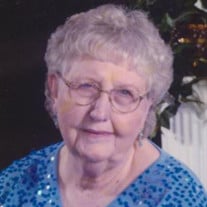 Martha J. Schneyer went home to be with the Lord on June 28, 2020. She was born Martha Jean Witters on Dec 11, 1933 to Frank W. and Mabel (Ruddell) Witters in Milroy, Indiana. She married the love of her life, Dr. J.N. (Jerry) Schneyer on August 9th, 1969. He preceded her in death on June 17, 1984. Martha grew up in Milroy and left in 1952 to attend nurses training at The General Hospital (Wishard) in Indianapolis. She graduated with an RN Diploma degree and later received her bachelor’s degree at the University of St. Francis in Joliet, Illinois. During her 40 years as a registered nurse, Martha worked primarily in the Intensive and Coronary Care Units but also in Obstetrics, Home Health and other areas. Her former patients and their families as well as her coworkers remember her as an excellent and caring nurse. Martha helped set up the original Coronary Care Unit and Home Health Dept. at Rush Memorial Hospital. She was instrumental in obtaining physicians for the RMH Emergency Dept. in its early stages. While working as a nurse, Martha was active in the Indiana State Nurses Association and the American Nurses Association. In 1992, Martha was asked to direct a mental health program for the nurturing and education of unwed and underprivileged new mothers. She wrote several newspaper articles regarding the program and its goals. Martha received the Indiana Continuity of Care Citizen of the Year award in 1993 in recognition of her role in promoting health and well-being throughout the community. She also received the Cancervive award in 1995 from Main Street Christian Church in recognition of establishing a new ministry for cancer survivors and their families. She was a cancer survivor herself. Martha was a longtime member of Main Street Christian Church. She served in many leadership roles well into her 80s, including serving several terms as an Elder and church board member as well as a chairperson for several committees. She loved music and sang in the choir for many years. Martha was well known as a devoted Christian and prayer warrior and was a spiritual mentor to many. Her love and devotion to the Lord was clearly evident. She opened her home and arms to anyone who asked. She led and attended many Bible studies and classes. Martha attended the first Greensburg Emmaus Walk in Greensburg, Indiana and went on to sponsor many others who attended the Emmaus Walk and gave their lives to Christ. She served on the Emmaus team many times and gave many speeches and testimonies regarding her walk with Christ. Martha was an avid reader and a member of the Milroy Monday Study Club. She was an accomplished seamstress and quilter and was a member of the Indiana Sewing Guild. She enjoyed making quilts for her family and friends, and many people desired a quilt made by Martha. Besides her parents and her husband Jerry, Martha is preceded in death by her sister Mary Alice Witters and her brother Richard Witters. Survivors include her stepdaughter, Freyda Jayne Chestnut of Ruston, WA, grandson John Kingsley (Amanda Wright) Chestnut of Seattle, WA, and granddaughter Anne Dickson Chestnut of Olympia, WA. Memorial contributions may be made to the Greensburg Emmaus Walk or to the donor’s choice. A memorial service will be held at Main Street Christian Church on Saturday, August 15, 2020 at 1 PM. Friends are welcome to visit one hour prior to service on Saturday at the church. Linda Daubenspeck & Chip West will preside. Burial will take place in Rushville's East Hill Cemetery. All in attendance are encouraged to wear a mask!!

Martha J. Schneyer went home to be with the Lord on June 28, 2020. She was born Martha Jean Witters on Dec 11, 1933 to Frank W. and Mabel (Ruddell) Witters in Milroy, Indiana. She married the love of her life, Dr. J.N. (Jerry) Schneyer on... View Obituary & Service Information

The family of Martha Jean Schneyer created this Life Tributes page to make it easy to share your memories.

Send flowers to the Schneyer family.