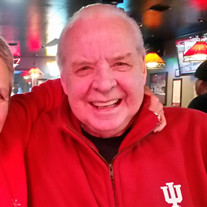 Mark Baron Huffman, 68, of Rushville, passed away August 10, 2019 in Indianapolis. Mark was born September 15, 1950 in Kansas City, MO to Max E. & Mary V. (Hancock) Huffman. He was a 1968 graduate of Waldron High School and later obtained his Bachelor's from Indiana University. He was married to Mary (Gulley) on July 17, 1993 and she survives. Mark worked many years for GE in Shelbyville before working for the USPS where he was a rural letter carrier in Eastern Shelby & Western Rush counties for 25 years. He was a former member of the Rushville American Legion Post #150 and present member of the American Legion Victory Post #70 in Shelbyville and was a Golden Eagle in the Rushville Eagles Lodge #2036. In addition to his wife, Mary, of Rushville, he is survived by sons, Scott Huffman & Lance (Misty) Huffman all of Waldron, a daughter, Caroline (Dr. Eric) Hartman of Jasper, his children's mom, Mary K. of Waldron, a brother, Roger Carlson, half brother, Jack (Jane) Lawrence, half sisters, Linda (Steve) Nugent, Cinda (Kent) Laird, Sherri Strangeway, and Ann (Mike) Laverty, grandkids, Brittany, Bethany, Presley, Peyton, Parker, Kyler, Carter, Noah, Dax and Theodora and great grandkids, Isla & Lennon. Mark was preceded in death by his parents, his step mother, Lenora Huffman and his twin brother, Max. Services will be held at 11 AM Thursday, August 15, 2019 in Moster Mortuary, Rushville with JR Billman presiding. Friends are welcome to visit the family at the mortuary on Wednesday evening from 4-8 PM. Burial will be in the Rushville East Hill Cemetery. Memorial contributions may be made to the Boy Scouts of America.

The family of Mark Baron Huffman created this Life Tributes page to make it easy to share your memories.

Send flowers to the Huffman family.