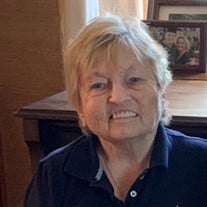 Margo A. Mull, 71, formerly of Rushville, passed away peacefully on November 3, 2019 in Greenwood where she had lived since 2010. She was surrounded by her loved ones. Margo was born March 19,1948 in Rushville to Maxine (Spacy) and Weldon Wall. Her two sets of Grandparents Clifford and Ruth (Sherwood) Spacy and Jesse and Hazel (Coon) Wall were excited to see such an adorable little bundle. Margo grew up on the farm and enjoyed lots of activities with her siblings. She attended Webb Elementary and was active in her classroom. She was a 1966 Graduate of Rushville Consolidated High school where she was very active in Alumni activities. She married Phillip K. Mull on July 1, 1967 and after 23 years of marriage he proceeded her in death on October 7, 1990. Margo’s parents Maxine (August 23, 2010) & Weldon (September 11, 1993), a brother, Dennis C. Wall (November 29, 1989), a nephew Gregory M. Whitaker (October 19, 2017) and an infant son Scott Phillip Mull (1979) all of Rushville proceeded her in death. She is survived by her daughter Jessica (Kyle) Cole, and a son Brian Mull both of Greenwood and her two granddaughters Whitney and Brooklyn Cole of Greenwood. Sisters, Deda Wall Whitaker, and Lisa Wall Winship of Rushville, and many beloved nieces and nephews. Margo in her early years worked at the Furniture Factory in Rushville and Frantz jewelers. She was an original employee of Rushville Walmart where she worked at the Customer Service Desk where she frequently received merit awards. Margo had for many years been a day care provider when her children were growing up, so that she could stay home with them. Margo and Phil lived in Pennsylvania, Wisconsin, Michigan, California, Indiana, and Tennessee during their marriage while he was in active military and after he became an executive with Entenmann Bakery. They would frequently entertain family and friends at their new homes and treat them to the best restaurants. Margo made friends wherever she went and has been able to keep in touch with them through social media, and many long phone calls. She was very active in the community with the Red Hat Society, Greenwood Christian Church, Widows Group, A 50-year member of Kappa Kappa Sigma, Main Street Christian Church, Bible Study groups, Class of 1966 and Homemaker clubs. She could always be counted on to help and add lots of laughter. Margo was a large spirit in a small body. She will undoubtedly be missed by everyone. Family and Friends will certainly feel a void left by Margo. Visitation will be at Moster Mortuary on Wednesday November 6, 2019 from 5-8pm with Funeral on Thursday November 7, 2019 at 10:00 am. with Pastor Matt Giebler of Greenwood Christian Church will officiate. Memorial Contributions can be made to the Phillip K Mull Memorial Fund or the Wall Family Memorial Fund at the Rush County Community Foundation.

Margo A. Mull, 71, formerly of Rushville, passed away peacefully on November 3, 2019 in Greenwood where she had lived since 2010. She was surrounded by her loved ones. Margo was born March 19,1948 in Rushville to Maxine (Spacy) and Weldon... View Obituary & Service Information

The family of Margo A. Mull created this Life Tributes page to make it easy to share your memories.

Margo A. Mull, 71, formerly of Rushville, passed away peacefully...

Send flowers to the Mull family.