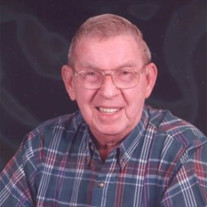 Lushin Roscoe (Rocky) Jacobs, 82, a longtime Rushville resident, passed away peacefully at his home on April 16, 2019. He was born April 8, 1937 in Crab Orchard, KY to the late Verlee & Sarah (Bunch) Jacobs. Rocky served form 1960-1963 in the US Army where he was an E4. He married Karen Sue Wilhelm on November 11, 1966 and she survives. He worked many odd jobs before being hired on at Visteon-Ford in Connersville where he worked 30 years, retiring in 1999. Rocky enjoyed fishing, woodworking, collecting cars, working in his yard, and spending time with his family! In addition to his wife, Karen Sue Jacobs, of Rushville, he is survived by his daughters, Melinda (Brian) Lecher of Laurel and Melissa (Joey) Robbins of Osgood, his grandchildren, Katie Woods (Mike Martin) of Arlington, Cody Woods of Rushville and Rebecca & Aaron Lecher of Laurel, his brothers, Roy (Carol) Jacobs of Rushville and Donnie (Cathy) Jacobs of Thousand Oaks, CA, his sisters, Opal Beard & Christine Shelton both of Rushville and Nita (Ralph) Moore of Bullhead City, AZ. He will also be missed by several nieces & nephews. In addition to his parents, Rocky was preceded in death by brothers, Ralph, Levi, Sam, Earl, Alonzo & Noah Jacobs. Services will be held at 1 PM Saturday, April 20, 2019 in Moster Mortuary, Rushville with Rev. Jeff Edwards presiding. Friends are welcome to visit at the mortuary after 10 AM Saturday until time of service. Burial will be in Rushville's East Hill Cemetery.

The family of Lushin Roscoe "Rocky" Jacobs created this Life Tributes page to make it easy to share your memories.

Send flowers to the Jacobs family.