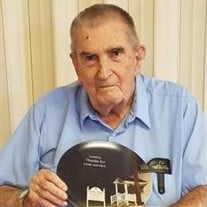 Mr. Lowry Lee McCord, 81 of the Cowan community, passed away Monday, September 2, 2019 at the University of Kentucky Chandler Medical Center after an illness of several weeks. He was born in Fleming County, Kentucky on September 25, 1937 to the late J.C. and Dauline Wells McCord. Besides his parents he was preceded in death by a brother Ronald Elmo McCord. Lowry was retired from Perfect Circle (Dana Corporation) in Rushville, Indiana after many years of service. He was also a farmer and a U.S. Army veteran. He was a member of the Pleasant Valley First Church of God where he taught Sunday School and served on the board of trustees for 34 years. Lowry attended Ball State University, was a Kentucky Colonel and loved to fish. He enjoyed Southern Gospel Music and spending time with his grandchildren and great-grandchildren. Survivors include his wife, Helen Craig McCord whom he married on December 20 1958. One daughter, Carol Lee and her husband Tim of Knightstown, Indiana,. Two sons, Tim McCord and his wife Lori of Rushville, Indiana and Mike McCord and his wife Janet of Seymour, Indiana. Two brothers, Gary Clyde McCord of Carlisle, Kentucky and Danny McCord of Cowan, Kentucky. One sister, Betty Belle Dawson of Frankfort, Kentucky and a sister-in-law, Patty McCord of Cowan, Kentucky. Ten grandchildren and fourteen great-grandchildren. Also, several nieces, nephews and other relatives and friends. Funeral services will be conducted 2:00 P.M. Saturday in the chapel of the Price Brothers Funeral Home in Elizaville with Rev. Greg Tucker and Rev. Mike Pennington officiating. Burial with full military honors by the W. N. Fant American Legion Post No. 5 and the Franklin Sousley VFW Post No. 1834 will be in the Elizaville Cemetery. Visitation at the Price Brothers Funeral Home in Elizaville is from 5:00 P.M. to 9:00 P.M. Friday. Serving as pall bearers will be Buddy Gray, Gary Kinder, Terry Kinder, Gary Gray, Justin Conley, Dr. Bill Bacon, Donnie McCord, and Justin McCord. Honorary pall bearers will be Mark Gray, Eric Gray, Jeff Jolly, Billy Ray Hunter and Robbie Carpenter. Contributions are suggested to the Pleasant Valley Church of God, in care of Mrs. Patty McCord, 10295 Elizaville Road, Ewing, Kentucky 41039.

Mr. Lowry Lee McCord, 81 of the Cowan community, passed away Monday, September 2, 2019 at the University of Kentucky Chandler Medical Center after an illness of several weeks. He was born in Fleming County, Kentucky on September 25, 1937 to... View Obituary & Service Information

The family of Lowry Lee McCord created this Life Tributes page to make it easy to share your memories.

Mr. Lowry Lee McCord, 81 of the Cowan community, passed away...

Send flowers to the McCord family.