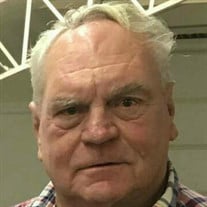 Lee L. Glover, 80 of Rushville, passed away on January 20, 2022 in Rushville, IN. He was born on August 2, 1941 in Rushville to the late Forrest Eugene and Rosa Lee (Dew) Glover. Lee married Donna (Dye) Glover on May 4, 1959 and she preceded him in death on May 31, 2015. He worked at Fraley and Schilling as a mechanic and trucker since 1991. Lee was a member of the Rushville Eagles Lodge, Moose Lodge of Rushville and the American Legion. He loved working on tractors and enjoyed the Steam Engine Show. Lee is survived by his daughter, Liz (companion, Rick Howard) McKinney of Rushville; sons, Lee (Sue) Glover, Jr. of Bargersville, Jeff Glover of FL, Paul (companion, Marikay) Glover of Rushville, Mike (Janet) Glover of Rushville, Mark (Peggy) Glover of Rushville, and Carl (Tammy) Glover of Rushville. He will also be missed by his 15 grandchildren; 9 great-grandchildren; and his extended family. Lee is preceded in death by his parents, wife and sister, Elizabeth Stewart. Services will be held on Thursday, January 27, 2022 at 11 AM in Moster Mortuary, with Pastor John Wall presiding. Friends are welcome to visit the family on Wednesday evening from 4 PM – 8 PM the in the mortuary. Burial will be held in East Hill Cemetery. Memorial contributions may be made to American Legion in Rushville. The family would like to thank the staff of Rush Memorial Hospital, family friends and Moster Mortuary for the care towards Lee.

The family of Lee L. Glover created this Life Tributes page to make it easy to share your memories.

Send flowers to the Glover family.