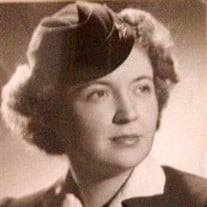 LaRee Alexander Gordon, 100, formerly of Greenfield, passed away in Rushville on Wednesday, August 22, 2018. Born July 15, 1918, in Orange Township, Rush County, she was the fifth of six children born to Edward and Pearl (Wagoner) Alexander. She was a 1936 graduate of Milroy High School and a 1938 graduate of Ball State Teachers College. She taught three years at the Indiana Soldiers’ and Sailors’ Children’s Home in Knightstown and two years in Lawrenceburg, IN. In September of 1943, she received her wings as a stewardess for American Airlines. Following a serious fall from a loading ramp. she retired from the airlines in 1951. On December 12, 1950, she married Gene E. Gordon and they eventually settled in Los Angeles, CA. Together they founded Presto Chemicals, Inc. which manufactured products for the fiberglass industry and created a new polyester enamel paint, Prestec. In 1973, they retired and moved to San Diego, CA. Following his death in 1984, she returned to Indiana, living in Greenfield until recently. She enjoyed traveling, playing cards, reading the local newspapers, and watching professional football on television. She was a member of the former Gowdy Methodist Church, a charter member of the Los Angeles Chapter of the Kiwi Club, and a member of both the Hancock County Historical Society, and the Rush County Historical Society Survivors include nieces, Sarah (Larry) Huskins of Rushville, Sandra (Terry) Ave of Vincennes, Erin (Richard) Kwolek of Fort Wayne; nephews, Gary (Marcia) Alexander of rural Manilla, Mark Alexander of New York City, Bryan Alexander of Indianapolis; four grand-nieces, two grand-nephews, one great-grand nephew, one great-grand niece; step-grandsons, Bob Wright and Jeff (Molly) Wright of California, and Larry (Carol) Richards of Oregon; and long-time friends and caregivers, Rene Williams of Greenfield and Rose Coates of Morristown. In addition to her husband, she was preceded in death by her parents, three brothers, Lowell (Franklin) Alexander, Loren (Bud) Alexander, and William A. Alexander; two sisters, Berniece Thomas and Velma Alexander; and a grand-niece. A funeral service will be held Saturday, September 1, at 1 p.m. at Moster Mortuary in Rushville with Rev. Teresa A. Poole officiating. Friends may call from 11-1 p.m. at the funeral home prior to the service. Burial will take place at the Moscow Cemetery. The family extends a special thank-you to her caregivers: Rene Williams, Rose Coates, Mary Lou Poe, Ronda Lovett, Laura Watts, the staff of Miller’s Merry Manor, Rushville, and the staff of Our Hospice of South Central Indiana. Memorials may be made to the Courtney Anne Huskins Memorial Scholarship Fund at the Rush County Community Foundation, Our Hospice of South Central Indiana, the Milroy United Methodist Church, or The Kiwi Club-Los Angeles Chapter c/o Pam Tatreau, treasurer 711 Loma Dr. Hermosa Beach, CA 90254. Online condolences may be left at www.mostermortuary.com

The family of LaRee A. Gordon created this Life Tributes page to make it easy to share your memories.

LaRee Alexander Gordon, 100, formerly of Greenfield, passed away
in...

Send flowers to the Gordon family.