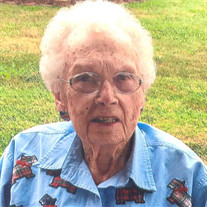 Katherine (Kay) Wedeking, 100, of Rushville, passed away November 12, 2018 in Rushville. Kay was born November 21, 1917 in Calvert City, KY to Austin P. & Luella (Hobgood) Wilkey. The family moved to West Point, MS in March of 1918 where Kay was reared. Her father sent her to live with an aunt in Evansville while she was in high school. She graduated from Reitz High School in 1935. She then went back to MS to graduate from Holmes Jr. College. Her interests were music & drama. On November 21, 1938 she married Dr. Ken Wedeking, O.D. whom she met in Evansville. They married in her home town of West Point. After their marriage they moved to Rushville where Ken opened an optometric office. Kay was a stay at home mom. She was the oldest living member of St. Paul's United Methodist Church where she was active in the choir and United Methodist women. She was a long time member of Chapter M of P.E.O. and Psi Iota Xi philanthropic sorority. Ken & Kay had 2 daughters, 1-Barbara (Dave) Schrage of Norman, OK., grandchildren, Eric (Susie) Gant of Henderson, NV and Dr. Kim Schrage of San Anselmo, CA and great-grandchildren, Colton & Kinley Gant. 2-Beverly (Monty) Howell of Rushville, grandchildren, Brian (Kasha) Howell of Rising Sun, IN and David Howell of Columbus, OH and great-grandchildren, Natalie Howell and step-grandchildren, Sam & Isaac Copeland. Kay is the last surviving member of her family of 6 girls and 3 boys. A memorial service will be held on Saturday, November 17, 2018 at 1 PM in St. Paul's United Methodist Church with Pastor Roy Ice presiding. Friends are welcome to visit at the church from 11 AM until service time on Saturday. Kay will be buried with her husband in the Indiana Veterans Memorial Cemetery in Madison, IN. at the family's convenience. Memorial contributions may be made to St. Paul's Missions Committee, Chapter M of P.E.O. Scholarship Fund or the charity of the donor's choice.

The family of Katherine (Kay) Wedeking created this Life Tributes page to make it easy to share your memories.

Send flowers to the Wedeking family.