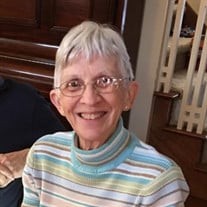 Judy Ann (Maple) Douglass was born nine weeks early on July 7, 1942, at 3 lb. 7 oz. in Rushville, Indiana. She beat the odds and survived because of love and a God-given dose of spunk. From the time she was a child, Judy’s eyes told the whole story behind this kind-hearted, loving, resourceful, and creative human being. She left us to begin her eternal life in heaven on November 15, 2021. The daughter of Verl (Jack) and Hazel Lewis Maple, Judy grew up on a farm in Rush County, Indiana and in New Salem, Indiana with her best friend and sister, Donna, by her side as her favorite playmate. Their parents loved each other and their girls totally. Family was always first. They expected honesty and for their girls to do the best they could, but they didn’t insist on perfection. There was hard work but plenty of fun was had, especially with their cousins. Judy graduated New Salem High School with the class of 1960. She worked as a car hop at Miller’s Drive In and later as a nurse’s aide at Rush Memorial Hospital, 3-11 p.m. She met Richard Douglass in the spring of 1962 at the Rushville Bowl. He worked days at First Federal Savings and Loan, so dating often meant ice cream at Dairy Delight. (They kindly agreed to stay open an extra 15 minutes for them to get there.) Judy and Dick were married at New Salem Methodist Church on August 11, 1963. Judy and Dick forged an equal partnership as they set about making a happy home and life in Rushville, Indiana. They welcomed children: Beth Ann in 1964, Steven Richard in 1966, and Sara Jeanne in 1970. Their family life was always happy, and Judy was a most giving, patient, kind and loving mother. Together, they led by example giving everyone room to be themselves. They taught their children to be happy and curious and kind, to stand up for what they believe and have the confidence to work toward their dreams. As a stay-at-home mother Judy was self-reliant, as Dick traveled most weekdays for his work. She was a busy mom, but found time to lead Girl Scout Troop 5, volunteer at Girl Scout Day Camp, as well as Bible School. She was a member of the Rushville Coffee Bowl League for years, as well as Psi Iota Xi Sorority, where she served as chapter president and was integral to raising scholarship funds through their concession tent at Pioneer Engineers Club of Indiana. That group brought her great joy and lasting friendships. As her children grew, Judy explored her creative side and taught herself to quilt. Eventually, she gifted beautiful and unique hand-stitched quilts to each of her children, grandchildren, nieces and nephews. She also learned to paint, taking weekly lessons for years with friends she cherished. Acrylics and watercolors, barns, birds, southwest mesas and harbor scenes, Judy painted with a passion, was a member of Indy Tolers Decorative Painting Club and won many ribbons at the Rush County Fair. These works of art were also gifted to people that were important to her. Judy was always creating and always giving—it was her way of showing how much she cared. Judy was a voracious reader, a green thumb that could grow anything outside, a magnet for animals and little kids, and a creative problem solver that was always up for a project—sewing, wallpapering, building furniture, remodeling—where there was a will there was a way, even if there wasn’t a big budget. Without fail, she and Dick took the family on annual camping vacations, then as empty-nesters set off on adventures in their motorhome traveling the southwest U.S., the east coast and Nova Scotia. They spent their retirement years split between their new place in Hamilton County and North Fort Myers, Florida, where they made more friends. Judy’s scrappy nature served her well at birth and then again in her final years. She struggled with the effects of Alzheimer’s/dementia during which time she became “new Mom” to her family. It was a difficult journey for everyone, but her sweet temperament, radiant smile and spunky spirit continued to shine through, and those eyes could look straight through to your soul and express just how much she loved you. Judy’s parents and husband, Richard, preceded her in death. She is survived by her loving children, Beth Ann (Greg) Silcox, Westfield; Steven Richard Douglass, New Salem; and Sara Jeanne (Matthew) Gottron, Port Clinton, Ohio; sister, Donna (John) Hunter, Terre Haute; brother-in-law, Jerry (Bonnie) Douglass, Rushville; sister-in-law, Sally (Donald) Barnes, Rushville; as well as four nieces and two nephews. Judy’s grandchildren renewed her memories of mothering her own kids and she loved them wholeheartedly: Logan (Maria) Douglass, Erin Silcox, Nathan Douglass, Claire Silcox, Jacob Gottron, Natalie Gottron, Riley Douglass, and Emma Gottron. Their memories of Grandma Judy will only bring joy. Her only great-grandchild, Mason Richard Douglass was a treat for her to behold. A memorial service for Judy will be Friday, November 26, at 2 p.m. at Moster Mortuary, Rushville, with a celebration of life honoring the life partnership of Judy and Dick Douglass beginning at 3:30 p.m. at The 201 Building, 201 N. Main St., Rushville. Family and friends are welcome to both. Masks are encouraged. Memorial contributions can be made in her name to Pioneer Engineers Club of Indiana, PO Box 536, Rushville, IN 46173 or to the Alzheimer’s Association at www.alz.org.

Judy Ann (Maple) Douglass was born nine weeks early on July 7, 1942, at 3 lb. 7 oz. in Rushville, Indiana. She beat the odds and survived because of love and a God-given dose of spunk. From the time she was a child, Judy&#8217;s eyes told the... View Obituary & Service Information

The family of Judy Ann (Maple) Douglass created this Life Tributes page to make it easy to share your memories.