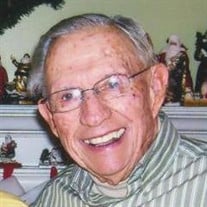 Joseph Franklin Swain, 90, of Rush County, Arlington, IN passed away on April 28, 2019 in Vincennes, IN. He was born on April 26, 1929 in Posey Township in Rush County, IN to the late Gernie and Mossilene (Hester) Swain. Joseph graduated from Arlington High School as Valedictorian in 1947. He married Martha Belle (Good) Swain on March 26, 1950 and she survives. Joseph and Martha farmed the family farm until retirement. He was a life member of Blue River Wesleyan Church and was God’s faithful servant. His memberships included Rushville Gideons and the Arlington Lion’s Club. He and Martha enjoyed attending their sons many activities including 4-H and Purdue Glee Club concerts. In addition to his wife, Martha, he is survived by his sons, Stephen (Ann) Swain of Chalmers, IN, Michael (Suzanne) Swain of Vincennes, IN, Philip (Sue) Swain of Bluffton, IN, James (Debbie) Swain of Vincennes, IN, Robert (Lisa) Swain of Fishers, IN, and David (Julie) Swain of Delphi, IN. Joseph will be missed by his grandchildren, Benjamin (Julie) Swain, Jonathan (Emily) Swain, Andrea (Travis) Piper, Cara (Bryan) Bunte, Julie (Lee) Westgerdes, Allison (Aaron) Chalfant, Shelby (Isaac) Myers, Justin Swain, Rachel Swain, Laura Swain, Emma Swain, Mason Swain, Hayley Swain, Ally (Andrew) Imel, Natali (Carson) Mann and 14 great grandchildren and one on the way. He is also survived by two sister-in-law Avonelle Good and Mary Helen Kaszynski. Joseph is preceded in death by his brother, Walter Lee Swain and 2 infant grandsons. Services will be held on Saturday, May 4, 2019, at 10:30 AM in Blue River Wesleyan Church with Rev. Aaron Marshall presiding. Friends are welcome to visit the family on Friday, May 3, 2019 from 4-8 PM in Moster Mortuary, Rushville, IN. Burial will be held in Blue River Wesleyan Cemetery. In lieu of flowers donations may be made to the Blue River Wesleyan Church or Rushville Gideons in memory of Joe.

Joseph Franklin Swain, 90, of Rush County, Arlington, IN passed away on April 28, 2019 in Vincennes, IN. He was born on April 26, 1929 in Posey Township in Rush County, IN to the late Gernie and Mossilene (Hester) Swain. Joseph graduated from... View Obituary & Service Information

The family of Joseph Franklin Swain created this Life Tributes page to make it easy to share your memories.

Send flowers to the Swain family.