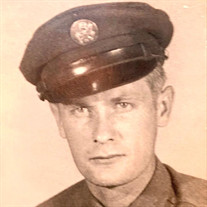 Joseph G. Archer, age 101, from Rushville, Indiana passed away September 13th, 2021 at the FlatRock River Lodge. Joe was a 1938 graduate of Raleigh High School and attended Earlham College before being drafted into the Army Air Corp. He was a P.F.C. in the US Air Corp Weather Division. Prior to going overseas he was stationed in Oklahoma City where he reported weather to pilots who were stopping to refuel and file flight plans. He was promoted to Sergeant and sent to Bradley Field in Hartford, Connecticut for overseas training where he met his future wife at a USO dance. He then shipped out to England to support P47 Thunderbolt aircraft. He served overseas for 4 years and entered France on Omaha Beach and supported P47s throughout France and Germany. After the war, he married Carolyn Jane Wells of Springfield, Massachusetts on May 25th 1946 and returned to Raleigh, Indiana and started farming. In addition to farming Joe also owned and operated the Archer Farm Supply business. Joe was Trustee of Washington Township and was also appointed to the Rushville School Board. He was a lifetime member of the Raleigh Christian Church where he served as trustee for many years. In 1950 he became a member of the Masonic Lodge and was a 71 year Mason. Joe was proceeded in death by his wife of 64 years, Carolyn Wells Archer and two sisters, Rozza Archer, Richmond, IN and Arabella Fultz, Boulder, CO. Joe has two surviving sisters Jacqueline Green of Georgetown, TX and Dorcas Hufferd of Hemet, CA. Survivors for Joe include two daughters Susan (Tom) Dunker of Columbus, IN; Leslie (Jim) Cottrell of Naples, FL; Grandchildren Alyson (Colin) Schermann of Fishers, IN; Erin ELKalla of Columbus, IN and three great grandchildren Hannah and Joey ELKalla; and Brooks Schermann. Joe is also survived by his loving companion and partner of 10 years, Myrtle Gwinnup. Services will be held on Saturday September 18th 2021 at 10:30 at the Raleigh Christian Church with Pastor Tony Augsburger presiding. Friends are welcome to visit the family from 4PM-8PM at Moster Mortuary on Friday, September 17, 2021. Burial will be held in Raleigh Cemetery. Contributions can be made to the Rush County Foundation, Our Hospice, or the Raleigh Christian Church.

Joseph G. Archer, age 101, from Rushville, Indiana passed away September 13th, 2021 at the FlatRock River Lodge. Joe was a 1938 graduate of Raleigh High School and attended Earlham College before being drafted into the Army Air Corp. He was... View Obituary & Service Information

The family of Joseph G. Archer created this Life Tributes page to make it easy to share your memories.

Send flowers to the Archer family.