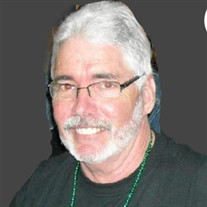 John David Gridley "Grid", 68, a lifelong Rushville resident, passed away June 18, 2019 in Rushville. John was born February 20, 1951 in Rushville to James Oliver & Virginia (Popp) Gridley, both deceased. John was a 1969 graduate of Rushville High School. John served in the US Army. He was married in 1973 to Jeanmarie Benedict. She & John were married for 26 years and she survives. John married Deborah Sue (Multner) Blom on September 7, 2002 and she preceded him in death on March 21, 2010. John had owned & operated Gridley Interior/Exterior Painting since 1976, prior to this he owned & operated Gridley Music Store in 2 locations. He was a member of Main Street Christian Church, President of the RHS/RCHS Alumni Association, past president and board member of the Rushville Parks Department and had served on the council of the Rushville Boys & Girls Club. John enjoyed hydroplane boat racing and had attended the Madison Regatta for a consecutive 59 years. He enjoyed CB radio, was a HAM radio operator and operated remote control airplanes. His love of music found him spending a lot of time at the Rushville Amphitheater during the concert series. He is survived by his daughter, Anna "Huggy" Gridley & her husband Noah Gabbard of Rushville, a son-in-law, James Becktel of Indianapolis, a sister, Mary Jo (Verlin) Custer of Rush County, a brother, Jim (Charlotte) Gridley of Greenwood and his grandchildren, Addyson "A.R." Lanane, Kaiden "Frank" Gabbard, Tess "Gladys" Becktel, Kinsley "Chocolate pickles" Gabbard, Nolan "Bob" Becktel and Piper Becktel. John was preceded in death by his parents, his wife and a daughter, Laura Becktel. A Celebration of life will be held for John on Saturday, June 22, 2019 at 1 PM in Moster Mortuary, Rushville. Friends are welcome to visit the family at the mortuary on Saturday from 11 AM until time of the Celebration. Burial will be held privately at a later date. Memorial contributions may be made to the RHS/RCHS Alumni Association, RCCF or to the Pheo Para Alliance.org.

The family of John David Gridley created this Life Tributes page to make it easy to share your memories.

Send flowers to the Gridley family.