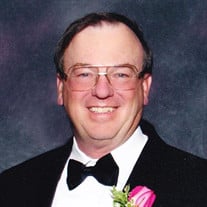 James H. Wilkinson, 65, a lifelong Rush County resident passed away October 29, 2019 at his home. Jim was born in Rushville on June 19, 1954 to the late Howard K. and H. Irene (Tucker) Wilkinson. Jim was a 1972 graduate of Rushville Consolidated High School and received his Associates Degree in HVAC from Ivy Tech Community College. Jim was a former member of Falmouth Snow Lodge #305 F. & A.M., where he was the past Master. He was also a member of Brookville Order of the Eastern Star Chapter #449, Maxwell Chapter #16 R.A.M., Fayette Council #16 F. & S. M. and Connersville Commandery #6. He was a past Chairman of the Rush County Democratic Party, past member of the Area Planning Commission and Board of Zoning Appeals and worked for Securitas Security. Jim was involved in the Rush County Optimist Club where he enjoyed working the concession during the youth soccer and 4th of July car show. He attended Orange Christian Church where he wrote the devotions for communion service. Jim enjoyed writing books, watching sports and spending time with his family. Jim is survived by daughters, Sarah (Doug) Andrews of Falmouth, Milly (Paul) Marlatt of Rushville and Megan (Arnold) Fields of Laurel, sister, Karen Wilkinson of Franklin, TN, brother, Mark (Diane) Wilkinson of Fortville, 4 grandchildren, Skyler Medd, Alvia Fields, Levi Marlatt and Lance Fields, several nephews and cousins. Jim was preceded in death by his parents, grandparents, aunts, uncles, cousins and his dog Duke. Services will be held at 1 PM Friday, November 1, 2019 at Moster Mortuary, Rushville. Mike Hedrick will preside. Friends are welcome to visit from 11 AM until the time of service the same day at the mortuary. A masonic service will be held at 12:45 PM prior to the service. Burial will be in Orange North Cemetery. Memorial contributions may be made to Orange Christian Church or the Orange Masonic Lodge.

James H. Wilkinson, 65, a lifelong Rush County resident passed away October 29, 2019 at his home. Jim was born in Rushville on June 19, 1954 to the late Howard K. and H. Irene (Tucker) Wilkinson. Jim was a 1972 graduate of Rushville Consolidated... View Obituary & Service Information

The family of James "Jim" H. Wilkinson created this Life Tributes page to make it easy to share your memories.

Send flowers to the Wilkinson family.