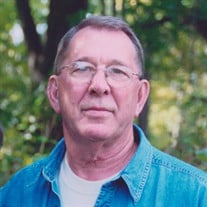 Harold O. (Mike) Ralston, 83, of Milroy, passed away on March 17, 2021 in Richland, Washington State. He was born on October 21, 1938 to the late John and Carrie (Reese) Ralston. He was a lifelong resident of Rush County. Mike was a graduate of Milroy High School. He married Judith Ann (Messer) Ralston on August 8, 1964 and she preceded him in death on January 13, 2021 in Milroy. Mike worked for Cummins Incorporated for over 24 years. Judith and Mike owned & operated the Village Inn for several years together. During his retirement, he did janitorial work at Milroy Elementary. Mike was a member of the Milroy Mason Lodge Post #62. He served his country in the United States Army. During his time at Milroy High School, Mike played multiple sports but excelled at basketball and baseball and is known for the dark ball. He was an avid sports fan but rooted the loudest for his grandsons and IU basketball. Mike was a much loved father and grandfather and will be greatly missed by his daughters and grandchildren. Mike is survived by his five daughters: Beth (Mark) Herbert of Milroy, IN; Jennifer (Eric) Pferrer of Noblesville IN; Carrie (Todd) Tressler of Rushville, IN; Kim (Dave) Ralston-Hooper of Richland, WA; Amy (Patrick) Lutz of Nobleville IN; and by his nine grandchildren: Clay (Kayley) Tressler, Garrett Pferrer, Keith Tressler, Cameron Pferrer, Mark Herbert, Zachary Pferrer, Landon Lutz, Bryce Lutz, and Samantha Herbert. He will also be missed by his sister, Donna Smiley of Milroy. Mike is preceded in death by his parents, wife, and 10 siblings. Bud (Arthur), Charles, Robert, Bill, Russel , John, Edna Ruble and two infant sisters. Memorial Service for both Mike and Judith will be held on Sunday, March 28, 2021 at 2 PM at Moster Mortuary, with Pastor Ron Simbro presiding. Friends are welcome to visit the family from 1:30 PM until the time of service. Burial will be held in East Brook Cemetery in Milroy. Memorial contributions may be made to the Rush Memorial Hospital Foundation or to Heartlinks Hospice in Washington State.

Harold O. (Mike) Ralston, 83, of Milroy, passed away on March 17, 2021 in Richland, Washington State. He was born on October 21, 1938 to the late John and Carrie (Reese) Ralston. He was a lifelong resident of Rush County. Mike was a graduate... View Obituary & Service Information

The family of Harold O. Ralston created this Life Tributes page to make it easy to share your memories.

Send flowers to the Ralston family.