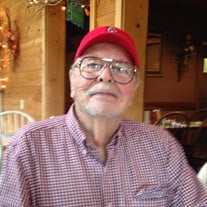 Gordon Paul Beck passed away peacefully in his sleep with family by his side on June 4, 2019 in Rushville, Indiana. He was born in Mount Summit, Indiana to William Joel and Ruberta (Peed) Beck, but later in 1939 moved, lived and resided in Speedway, Indiana. After graduating high school in Speedway, he attended Butler University in 1948 and transferred to Ball State University, where he studied music education and graduated in 1954. He obtained a Master’s degree from Indiana State University where he was a Music Education graduate in 1956. While at Ball State University, he was a member of Theta Chi fraternity and in the musical fraternity Phi Epsilon at Indiana State University. Gordon taught as a band director at many schools during his teaching career: Northwestern School District (1959-1961), Waldron High School (1961-1963), Manilla and Arlington High Schools (1964-1969), Southwestern High School (1969-1975), Cascade High School (1976-1978) until retiring from teaching in 1978. He went on to work at Hillenbrand Industries where he finally retired to enjoy life in 1979. When friends spoke of Gordon, they remembered a kind, friendly and non-judgmental man who loved to artfully tell of his memories as stories. He was so proud of all his family and all they accomplished, whether it was Christy’s singing or Greg’s drumming, he always beamed with pride. If you weren’t family you weren’t left out. He had a close knit group of friends he treasured. He was teacher by trade and by nature. Anytime he could teach or tell stories he was in his element. He constantly created a joke or gave those he cared about a hard time with his quick, humorous wit. He enjoyed golfing, fishing, a good meal and just being with loved ones. He lived a full, wonderful life. He is survived by his daughter, Christina (Mike) Pavey of Rushville, and Gregory (Charity) Beck of Denton, Texas. He will also be missed his grandkids, Shea, Maya and Sage Beck and Nicholas Pavey and many friends whom he considered family. In addition to his parents, Gordon was preceded in death by his brother, William Christopher Beck and his sister, Anna Louise (Beck) Russell. Friends are welcome to visit the family on Friday, June 7th, 2019 from 4-8 at Moster Mortuary, Rushville. Private burial with family will be held at Crown Hill Cemetery, Indianapolis.

Gordon Paul Beck passed away peacefully in his sleep with family by his side on June 4, 2019 in Rushville, Indiana. He was born in Mount Summit, Indiana to William Joel and Ruberta (Peed) Beck, but later in 1939 moved, lived and resided in Speedway,... View Obituary & Service Information

The family of Gordon Paul Beck created this Life Tributes page to make it easy to share your memories.

Gordon Paul Beck passed away peacefully in his sleep with family...

Send flowers to the Beck family.