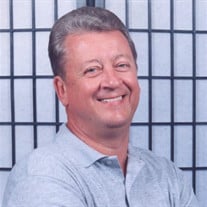 Glenn W. Wood, 79, a lifelong Rushville resident, went home to be with his Lord & Savior on April 23, 2019 in Rushville. Glenn was born May 13, 1939 in Rushville to the late Harrell "Pete" & Jessie (Gastineau) Wood. He was a 1957 graduate of Rushville High School and served in the US Army from 1958-1961. Glenn married Kay Rhodes on December 23, 1962 and she survives. Glenn was an upholsterer many years for International Furniture in Rushville before going to work for Ford Motor Company in Indianapolis. He retired as a machinist from Ford in 1997 after 33 1/2 years. He attended the Life Tabernacle Church in Indianapolis and was a longtime member of the UAW Local #1111 in Indianapolis. Glenn & his wife, Kay, enjoyed & were well known for their many years of "Clowning" around. In addition to his wife, Kay, of Rushville, he is survived by his sons, Brian (Sherry) Wood of Rushville and Brint (Renea) Wood of Fort Wayne, a daughter, Brinda Wood of Rushville, brothers, Gene (Carol) Wood of Rushville and Gary Childers of Sheridan, a sister, Bonnie (David) Carfolite of North Carolina, grandchildren, Kelsey Wilson, Kodey Griffin, Brayton Wood, Jensen Wood, Marshall Wood and Kaylynn Wood and great grandchildren, Charlie & Oliver Griffin, Marin Wilson + another to arrive mid May 2019. In addition to his parents, Glenn was preceded in death by an infant daughter, Teresa Lynn Wood (1963), a brother, David Wood, a sister, Beth Ann Malcom and a half sister, Jackie Pierce. Services will be held at 11 AM Saturday, April 27, 2019 in Moster Mortuary, Rushville with Pastor Danny McAdams presiding. Friends are welcome to visit at the mortuary on Friday evening, April 26, from 4-8 PM. Burial will be in the Glencove Cemetery in Knightstown. Military rites will be provided by the Rush County Veteran's Honor Guard. Memorial contributions may be made to the American Diabetes Foundation.

The family of Glenn W. Wood created this Life Tributes page to make it easy to share your memories.

Send flowers to the Wood family.