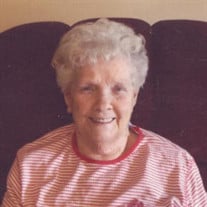 Gladys Fussner, 92 of Milroy, passed away on January 18, 2021 at her home in Milroy. She was born on July 28, 1928 in Rush County, IN to the late Edward “Pete” and Stella (Fishback) Richey. Gladys was a 1946 graduate of Milroy High School. She married Clifford L. Fussner on January 5, 1949 and he preceded her in death on October 5, 2001. Gladys worked at the glove factory in Milroy for several years. She was a member of Milroy Christian Church. Gladys enjoyed crocheting, cooking and crossword puzzles. Gladys is survived by her daughter, Teresa (Ty) Watson of Greenfield, sons, Terry L. (Julie) Fussner of Richland, Steve A. Fussner of TN, Michael L. (Sandy) Fussner of Rushville, Jack L. (Vicki) Fussner of Connersville, James C. (Rosemary) Fussner of Rush County, John D. (Diane) Fussner of Richland, and Richard F. Fussner of Richland; and sister, Mary Ellen Norwald of Greensburg. She will also be missed by 14 grandchildren,20 great grandchildren, and 4 great-great grandchildren. Gladys is preceded in death by her husband, brothers, Billy Richey and Paul Richey; sisters, Ethel Fisher, Norma Clark, and Naomi Martin, daughter-in-law, Shirley Fussner. Private Funeral Service will be held at Moster Mortuary. Graveside Service will be held on Monday, January 25, 2021 at 11 AM in Richland Cemetery, with Pastor Chip West presiding. Memorial contributions may be made out to Our Hospice of Southern Indiana or Richland Cemetery.

The family of Gladys Fussner created this Life Tributes page to make it easy to share your memories.

Send flowers to the Fussner family.