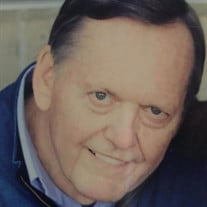 Dr. Richard Warren Houston MD went to be with his Lord and Savior Jesus Christ at the age of 76 on Friday, December 11, 2020. Dick was born in Richmond, IN on November 27, 1944, and was the youngest of two sons born to the late Herschel and Mildred Houston (Allison/Williams) and her late husband Robert (Bob) Williams. He is survived by his wife of 49 years, Donna Jean Houston (Hinchman), and three children; Terri Christine (David) Gillay, Jeffrey Lowell (Jessie) Houston, and Timothy Richard (Meghan) Houston; dear brother Phillip (Joan) Houston, and grandchildren Nicholas, Jacob, and Amanda Gillay; Kaylee, Tyler, Alex, Benjamin, and Lilly Houston. Dick graduated in 1963 from Richmond High School where he was active in track, basketball, and football. He enjoyed lifelong friendships with many of his teammates and classmates - recently participating in weekly Zoom calls. After high school, Dick attended DePauw University, graduating in three years. While there, he starred on the basketball team with his famous jump hook shot (he tried relentlessly to pass this skill along and it became a family joke because no one could ever master it like he did) and was a member of the Phi Kappa Psi fraternity. In 1971, he graduated from Indiana University Medical School then served as an Internist and Flight Surgeon in the United States Air Force. In 1978, he completed his medical education as a Gastroenterologist and practiced for more than 40 years in a variety of states, including Illinois, Indiana, Michigan, North Dakota, and Ohio. He was renowned for his compassionate bedside manner, care, and the true concern he provided all of his patients. Dick retired in 2020 from the Veterans Affairs Hospital in Indianapolis. On June 19, 1971, Dick married the love of his life, Donna Jean Hinchman from Rushville, IN. They raised three children who miss him dearly and cherish their many adventures together. His selfless support and dedication to family as well as unrelenting work ethic were inspiring and prompted his children and grandchildren to strive to do their best in all situations. Dick was a devoted husband, amazing Dad, fun-loving Grandpa, and loyal friend. He truly valued these roles and always made sure to be home for family dinners and attend his children and grandchildren's countless sporting events and concerts. Dick enjoyed spending time with Donna as well as his family and buddies, golfing (known for his consistent middle-of-the-fairway drives), exercising, cheering on the Green Bay Packers, watching and learning the history behind movies, reading books, debating politics (often yelling at the TV pundits), sipping an occasional Rusty Nail cocktail, and participating in Richmond High School Alumni events. In addition to his wife, children, grandchildren, and brother, Dick will be dearly missed by his nieces Lori (Scott) Brame,Amy (Chris) Oler, Julie Houston, Julie (Bill) Moster-Pappas, Jenni-Lynn Moster-Gilbert, Taylor Gilbert, Jessica Pursley; great-nieces and nephews, Elizabeth and Wesley Brame, Michael and Molly Oler;and brothers and sisters-in-law Linda (Jack) Clarkson, Lou Ann (Mike) Pursley, and Elda (Scott) Gray. Dick’s family is comforted in knowing that he is in Heaven with Jesus and that we will one day see him again. Services will be held on Monday, December 28, 2020, 1:00 PM at Moster Mortuary in Rushville. Services will also be streamed online at www.mostermortuary.com Burial will be held at Rushville East Hill Cemetery. Memorial contributions may be made online in Dick’s honor to: Wounded Warrior Project (www.woundedwarriorproject.org) or Blue Star Mothers of America (www.bluestarmothers.org).

Dr. Richard Warren Houston MD went to be with his Lord and Savior Jesus Christ at the age of 76 on Friday, December 11, 2020. Dick was born in Richmond, IN on November 27, 1944, and was the youngest of two sons born to the late Herschel and... View Obituary & Service Information

The family of Dr. Richard Warren Houston MD created this Life Tributes page to make it easy to share your memories.

Dr. Richard Warren Houston MD went to be with his Lord and Savior...