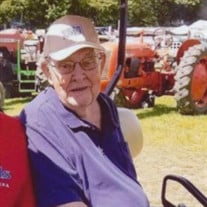 Donald W. May (Jug) 91, a lifelong Rush County resident and auto mechanic passed away on August 17, 2020 at his home with family at his side. Jug was born August 4, 1929 in Rush County to the late Elmer and Clare (Swegman) May of Rushville. Jug spent most of his adult life as an automotive mechanic. His love of automobiles started when he was a kid looking for old lawn engines in Harry Schott’s junkyard to affix to bicycle frames. That is where he earned the nickname “Jug” due to his none acceptance (Jugheadedness) of hearing that his plan would not work. The success of his plans could be debated, but the nickname stuck and for most people around Rushville that was the only name in which they knew him. When he moved from bicycles to automobiles he worked at Howard Well’s Pure Oil. He worked for George C. Alexander Buick & GMC, Harry Hyatt Buick, Joe Walker Buick, Harold & Pell, Art Mullen, Lowell Higgins’ Auto Center, Rushville Ford, Goins Ford, Paul Rees’ Standard, and Lloyd Motors. The years that he enjoyed the most were when he ran Jug’s Auto Service out of Jones Wrecker Service in Circleville. Jug was a General Motors man to his core. He was a Certified Cadillac/Pontiac/Buick/Oldsmobile Craftsman. He was known and sought out for his carburation and transmission expertise. That expertise was often sought out well after he had gone home for the evening. There were not many evenings that went by that someone would not bring their car out to his house for a quick look. He would be under the hood or driving it into his garage in no time to get them back on the road. Jug was a motorsports fan his entire life. He was an avid NASCAR fan making trips with his buddies down to Daytona when the race was still being held on the beach. The Indy 500 was also a favorite of his as he went up for qualifications and the race for many years. He was a frequent spectator at the TQ races in town. He loved going to motocross races and became a pretty good Yamaha mechanic. In his retirement years, he was still following NASCAR on TV, became a Pacers’ fan, and watched all the Indiana Colleges play basketball. He looked forward to mowing his yard. He was an expert on old western TV shows as he had seen all of them many time over. He spent a lot of his time drawing and sketching pictures. He became quite the artist even becoming a regular entry at the Rush County Fair. His drawings earned many first place ribbons as well as Reserve Grand Champion and Grand Champion. What he enjoyed most was giving his pictures to friends, family and people that he would meet in town. There probably is not an employee at Rush Memorial Hospital that does not have one of his drawings. If they do not, it was just because he hadn’t got to them yet. He is survived by his daughter Karen (Dana) Brown of Rushville and sons Don (Tracy) May of Montana and Jeff (Mindy) Sherwood of Rush County, his sister Margie (Tom) Coffey of Shelbyville and 9 grandchildren, 10 great-grandchildren and 5 great—great grandchildren. Jug was preceded in death by his wife Ethel (Richardson) May, son Terry A. May, 4 sisters and a brother. Moster Mortuary in Rushville is handling arrangements. In the interest of everyone’s health, a grave side memorial will be held at 1PM in Orange Township Cemetery on Thursday, August 20, 2020, with Pastor John Wall presiding.

Donald W. May (Jug) 91, a lifelong Rush County resident and auto mechanic passed away on August 17, 2020 at his home with family at his side. Jug was born August 4, 1929 in Rush County to the late Elmer and Clare (Swegman) May of Rushville.... View Obituary & Service Information

The family of Donald W. May created this Life Tributes page to make it easy to share your memories.

Send flowers to the May family.