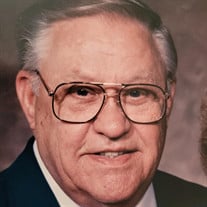 Donald “Don” Bright, 93 of Rushville, passed away on February 14, 2022 in Rushville. He was born on September 19, 1928 in Cisco, IL to the late Clifford and Della A. (Newton) Bright. Donald was a 1946 graduate of Arlington High School. He also attended the University of Cincinnati for two years. Don married Patricia (Johnson) Bright on October 24, 1987 and she survives. Donald served his country in the United States Army during the Korean War. He was twenty-one years old working, and had his first car when he got the letter. The letter was from President Truman saying he was selected to serve in the Army. He left the Rushville Post Office to go to Illinois to receive immunization shots. Then they took a troop train to the state of Washington for basic training. Donald was then sent to San Francisco to Fort Presidio; while he was there he got the order to go to the Korean War. He was a Private E-1 (Lowest rank) in the 101 st Airborne Division. Don was in Korea for 8 months, but the ship ride to Korea took one month each way, so he was gone for a total of ten months. He was promoted to Sergeant First Class during his service. Don was in the Army for 2 years and then spent 5 years in the enlisted reserves. He received his honorable discharge in 1957. Donald received the Korean Service Medal, Two Bronze Stars and the United Nations Service Medal. Donald was involved with auto racing. He has been a member of USAC (United States Auto Club) since it was organized in 1956. He began as a Pit Steward, Assistant Starter, Assistant Registrar, and Registrar. He traveled to different races tracks all over the country including the Indianapolis Motor Speedway. Donald retired from being a Vice President at Cash Valve in Decatur, IL. His hobbies are racing, puzzles, horseshoes and basketball. He was a member of the Rushville Eagles, Rushville Elks, American Legion, VFW, AMVETS, Veterans Administration, USAC, Clarksburg Firehouse and New Salem United Methodist Church. In addition to his wife, Patricia, he is survived by his step-son, Mike (Jane) Hammonds of Lafayette; sister, Virginia Wesling of New Salem; 2 grandchildren and 6 great-grandchildren. Donald is preceded in death by his parents. Services will be held on Saturday February 19, 2022 at 1 PM in Moster Mortuary, with Pastor Jerran Jackson presiding. Friends are welcome to visit the family from 11 AM until the time of service in the mortuary. Burial will be held in Fisher Cemetery.

The family of Donald "Don" Bright created this Life Tributes page to make it easy to share your memories.

Donald “Don” Bright, 93 of Rushville, passed away on February...

Send flowers to the Bright family.