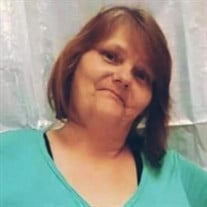 Diane A. Motz, 56, a long time Clarksburg area resident, passed away April 6, 2021 in Indianapolis. She was born December 30, 1964 in Rushville to Daniel & Norma Jean (Harvey) Edwards. Diane married Richard Motz on October 22, 1983 and he survives. Diane was a member of the Clarksburg Christian Church. She was quite a character and enjoyed playing pranks on everyone! She always looked forward to the Rush County Fair & enjoying a corn dog and an ear of corn. She made frequent trips to Stagg's Dairy treats with her family and some of her favorite things were sunflowers, fireworks, cigarettes, hummingbirds, and singing Karaoke. Her favorite things in life were her grand babies and putting others before herself! In addition to her husband; Richard, of Clarksburg, she will be missed by her children; Richard D. Motz II (Ashley Nicole) of Milroy, Robert Motz (Brooke Keister) of Clarksburg, Brayden Scott Motz of Clarksburg, Marlena Lin Bell (Aaron) of Milroy, Dorothy "DJ" Robbins (Randall) of Lake Santee, Harley & Madison Motz both of Clarksburg, a brother; Dan Edwards Jr. (Lisa) of Milroy, sisters; Jan Garrison of Milroy and Nan Hoban (Kenny Madden) of Gowdy, 14 grandchildren also survive. She was preceded in death by her parents, a sister; Ann Hornaday, a grandson; Skyler Joseph Seitz and brothers-in-law; Bill Garrison, Jay Hoban and Randy Hornaday and niece, Amy Hoban. Services for Diane will be held at 1 PM Monday, April 12, 2021 in Moster Mortuary, Rushville with Rev. Jerran Jackson presiding. Friends are welcome to visit the family from 11 AM until time of service on Monday. Entombment will be held in the East Hill Shrine Mausoleum. Memorial contributions may be given towards the cost of services.

The family of Diane A. Motz created this Life Tributes page to make it easy to share your memories.

Send flowers to the Motz family.