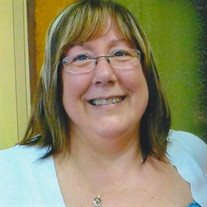 Diana Lynn Wright, 60 of Rushville, passed away on April 22, 2018 surrounded by her loving family. She was born on October 2, 1957 in Wayne County to Charles “Ed” Cornett and Juanita (Davis) Cornett Jordan. Diana was a 1976 graduate of Union County High School. Diana grew up in Liberty, Indiana until 1987 when she settled in Rush County. She married the love of her life Brian Wright on February 14, 1998 and he survives. Diana worked 34 years for the Purdue Extension Office in both Union and Rush counties. She retired August 1, 2017. She was a member of Little Flatrock Christian Church. Diana loved decorating for the Christmas season and making crafts. She always enjoyed wine and game nights with her dear friends, road trips in the Jeep, and above all being with her grandchildren. In addition to her husband, Brian of Rushville; she is survived by her mother, Juanita Jordan of Liberty; brother, Donald Wayne (wife, Jan) Cornett of Hamilton, Ohio; her children, Misty (husband, Jason) Raider Lee of Rushville, Erica (husband, JR) Raider Rouse of Rushville; grandchildren, Noah and Nathan Lee, Emily and Cole Rouse, and several nieces and nephews. Diana was preceded in death by her father, Charles “Ed” Cornett and sister, Linda Cornett Charles. Services will be held on Thursday, April 26, 2018 at 10 AM in Moster Mortuary, with Pastor Amy Lee Covington presiding. Friends are welcome to visit the family at the mortuary from 4-8 PM on Wednesday, April 25, 2018. Burial will be held in East Hill Cemetery. Memorial contributions may be made to The Rush County 4-H Council: Purdue Extension Office, 101 East 2nd Street, Rushville, IN.

The family of Diana Lynn Wright created this Life Tributes page to make it easy to share your memories.

Send flowers to the Wright family.