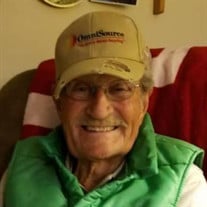 Dester Ray "Dick" Wesley, 88, a long time Rushville resident, passed away at his home in Rushville on December 1, 2021. Dick was born September 26, 1933 in Pulaski County, KY to Theodore & Nellie (Mofield) Wesley. He was drafted into the US Army in 1954 and served in Germany for 18 months. He married Colleen Moore on April 10, 1954. He worked at the Canning factory and the Tractor Cab Co. in Arlington and as janitor at Arlington High School. He then worked for Chrysler Corporation while attending barber school in Indianapolis. Dick began his career as a barber in Rushville and went to Carthage to apprentice with Russell Furgeson. He had the opportunity to buy Furgeson's shop and cut hair downtown for 30 years. On Sept. 8, 1991 he moved to his 813 North Oliver street location & operated Wesleys Barber Shop until his retirement in 2018. Dick was a long time member of the Arlington Christian Church. He enjoyed watching baseball,basketball, golf and football, he bowled on the Wednesday nite league in Rushville and he loved to golf and shot a hole-in-one! He was an avid IU Fan! He is survived by his wife; Colleen of Rushville, a son; Gary (Connie) Wesley of Indianapolis, his daughters; Beth (Mike) Williams of Kissimmee, FL, Holly (Doug) Whitaker of Rushville and Carolyn Wesley of Rushville, a brother; Boyd Wade Wesley of Danville, KY, grandchildren; Nicholas (Ashley) Wesley, Kelly (Alex) Partlow, Joshua & Jerrod Wedding, Abbey Jo Whitaker (Fiance' Jonathan), Daniel (Courtney) Herbert, Stephen Cole (Macy) Hittle and McKenzie Hittle and great grandchildren; Emma & Scarlett Partlow, Evelyn Faye Wesley, Natalie Rae Hittle, Averi Laine Wedding and Oaklee James Herbert. Dick was preceded in death his parents, a son; Steven R. Wesley, twin granddaughters; Olivia Marie & Victoria Rene' Williams, a sister; Mathel Spaw and brothers; Chester & Floyd Wesley. Services will be held at 10 AM Monday, December 6, 2021 in Moster Mortuary with Gary Holt presiding. Burial will be in the Arlington East Hill Cemetery. Friends are welcome to visit the family from 2-6 PM Sunday, December 5 at the mortuary. Military honors will be presented by the Rush County Veteran's Honor Guard. Memorial contributions may be made to the Arlington Christian Church.

Dester Ray "Dick" Wesley, 88, a long time Rushville resident, passed away at his home in Rushville on December 1, 2021. Dick was born September 26, 1933 in Pulaski County, KY to Theodore & Nellie (Mofield) Wesley. He was drafted into the US... View Obituary & Service Information

The family of Dester Ray "Dick" Wesley created this Life Tributes page to make it easy to share your memories.

Send flowers to the Wesley family.